Progress update 12th Mar 18:
John has mostly finished setting up the front end for me – he’s made up a bearing spacer, axle spacer, caliper mount & making up a new steering stem. I need to finish tidying the wheel, install seals, finish shortening the forks, then instal. I’ll need a brake line. 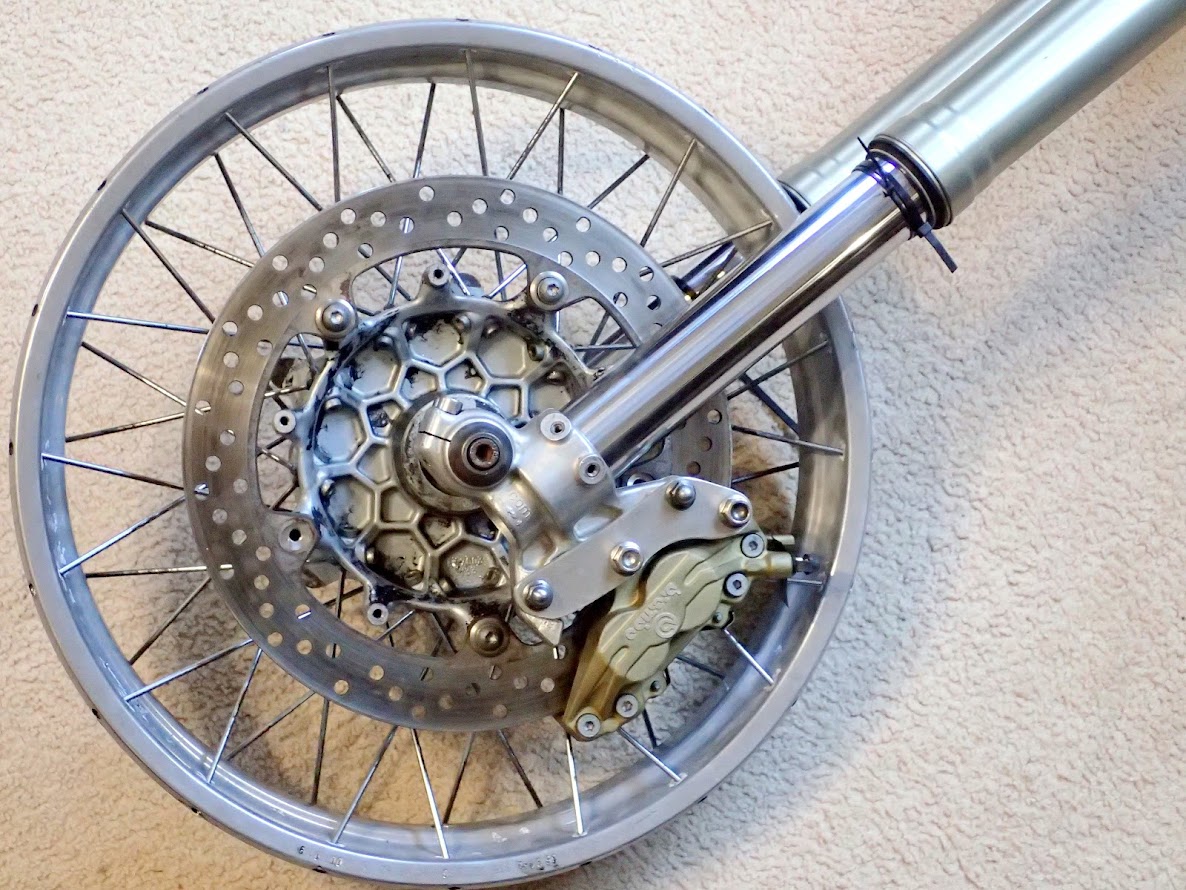 Gearbox overhead – continued:
I have continued on with the gearbox, but am caught waiting on parts. Motobins should have sent Fedex, but mistakenly sent via Royal Mail. That means that rather than finishing the gearbox this weekend, it’ll be at least easter weekend before that is finished.

Last time I did a gearbox I did that with heat, a bearing puller, & a bearing separator. That was doable, but fairly painful. I started down the same track, made some pretty metal baubles using coins to protect the shafts from the bearing puller end, but got stuck with one recalcitrant bearing. 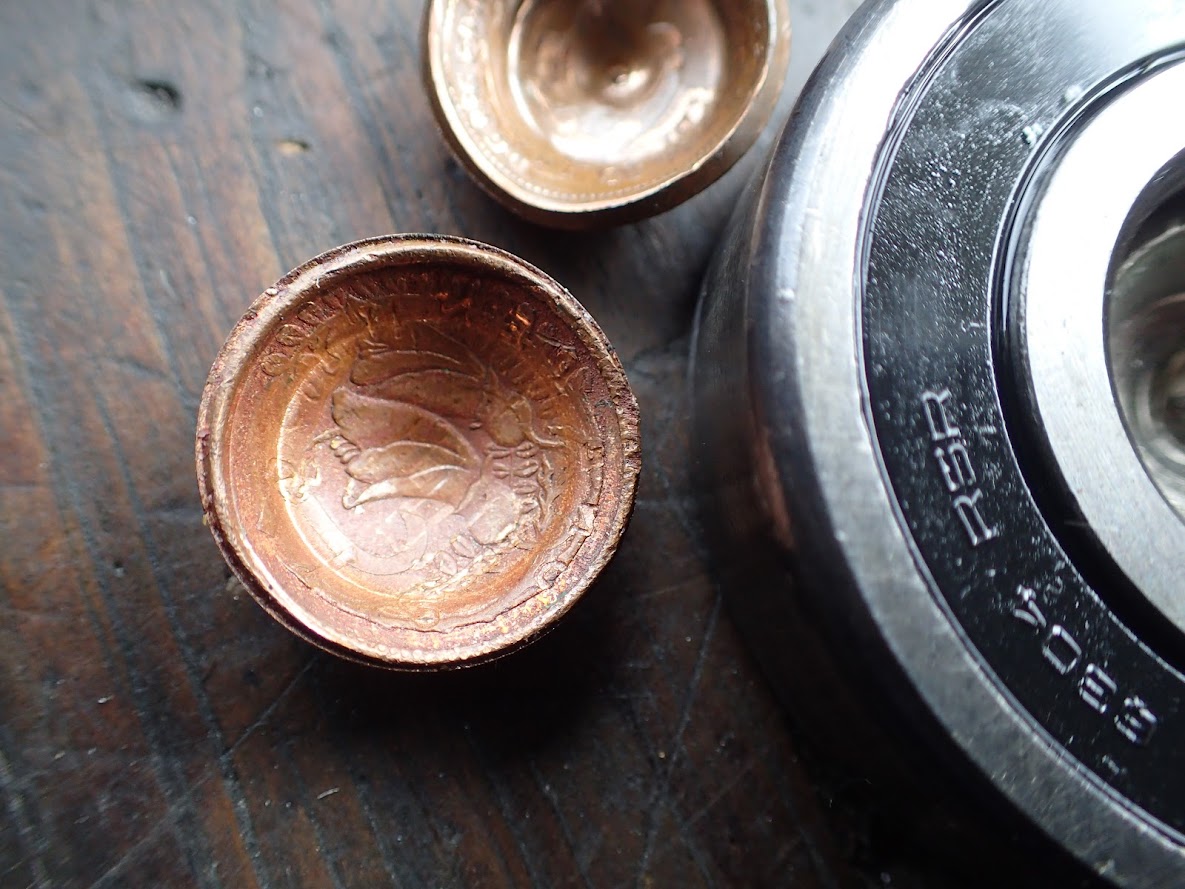 So this time I’ve bought a 12 tonne hydraulic press, which has made pressing on & off the bearings a whole heap easier. 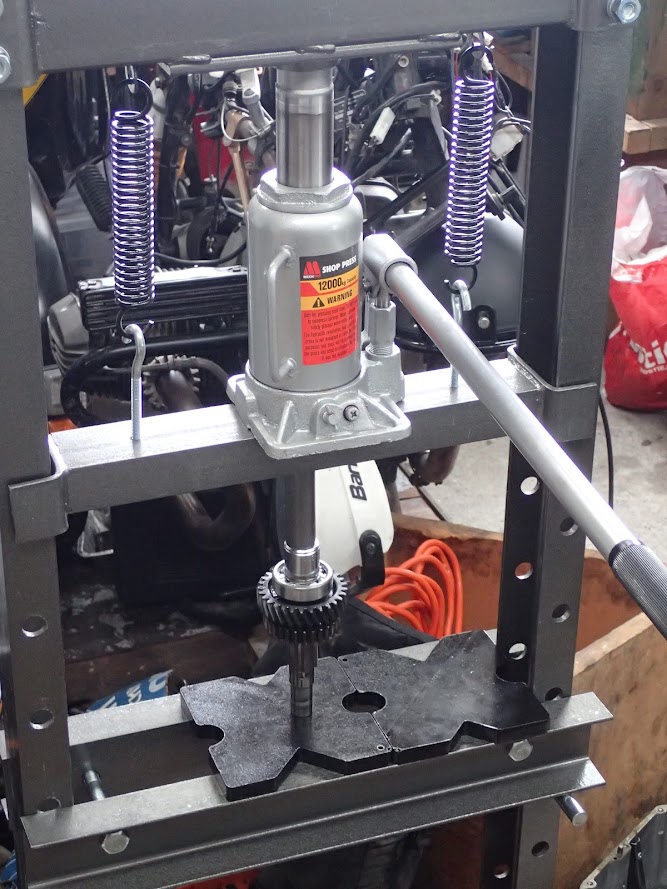 The other reason for the press was that I decided Gus’s final drive may be too high geared for the work the sidecar does, so a lower first ratio would help. The Seibenrock 5% lower first is available via Motobins, so I’ve bought that. That brings first gear more in line with an R80GS paralever. To replace first gear, that gear needs to be pressed off the intermediate shaft. That needs a fairly grunty press. Fortunately the new press coped, albeit there was a heap of groaning going on. Here’s the gear still sitting on the shaft in the bearing area, post separation. I used the gear next to it (which moves freely on the shaft) to help ease it off, together with a bearing separator. 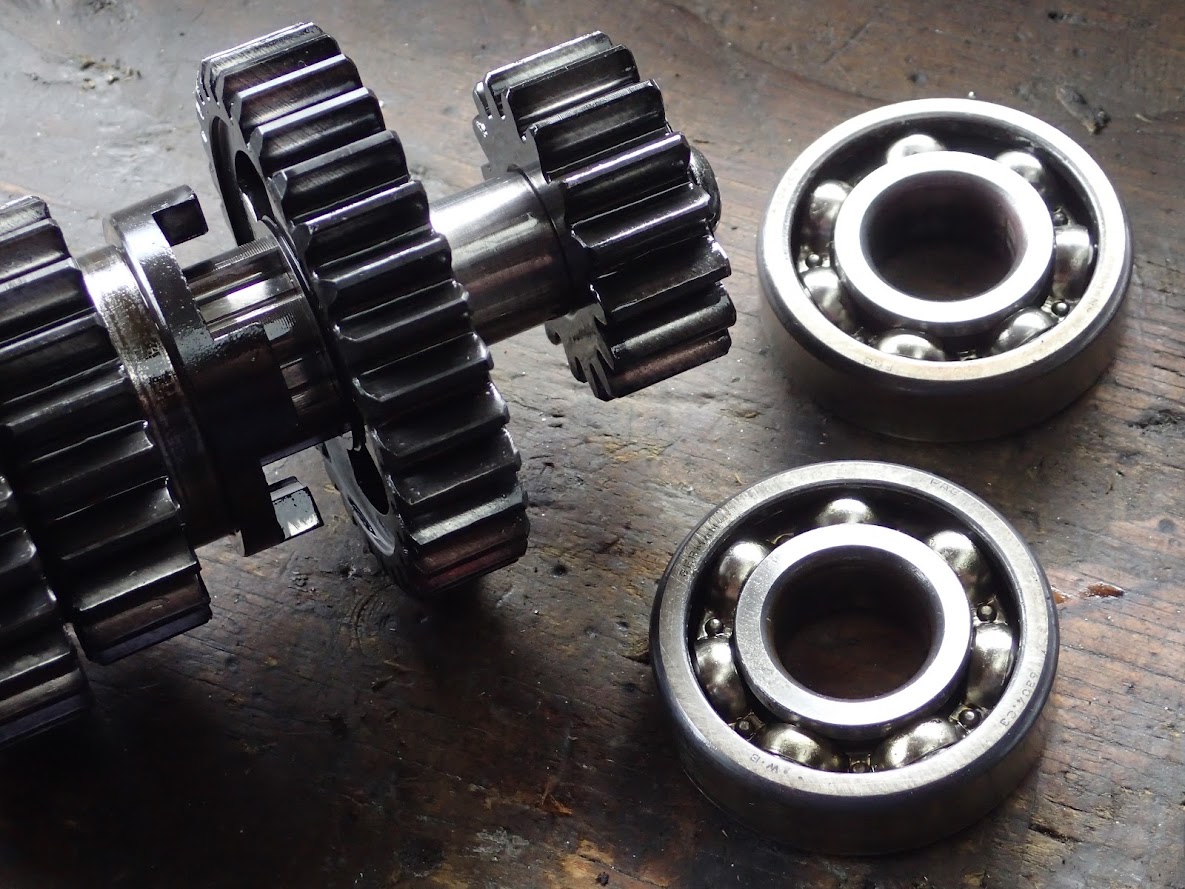 The final reason was that I had decided to replace the input roller bearing & it’s associated top hat. The top hat had developed a groove from where the input seal was rubbing. The top hat has to be pressed backwards over the input shaft, which means all of that shaft needs to be stripped. I’ve made up a tool to allow the little spring clip to be released from the base the shock spring. 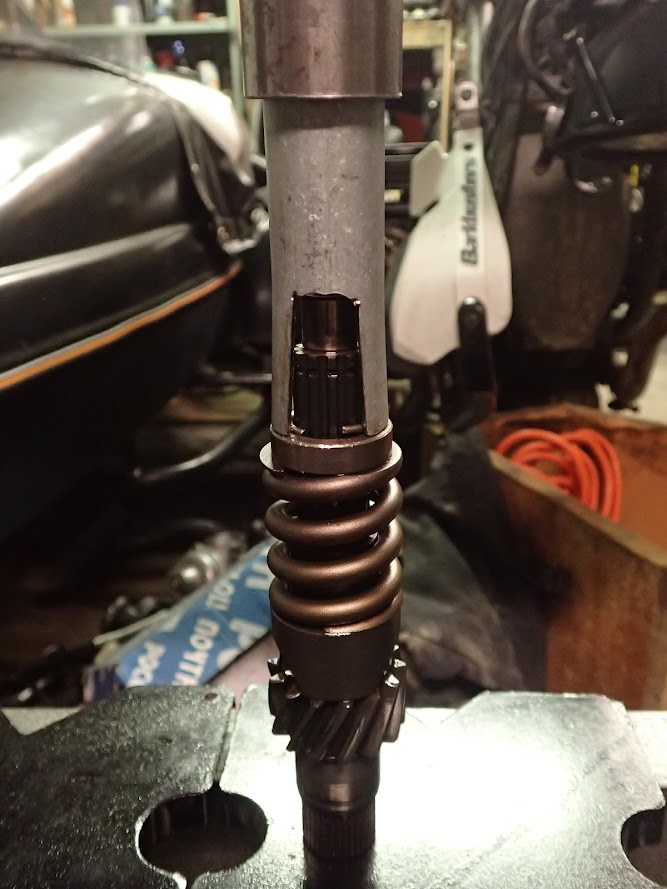 However, in doing that I discovered more wear on input Helical gear ramps than I expected. 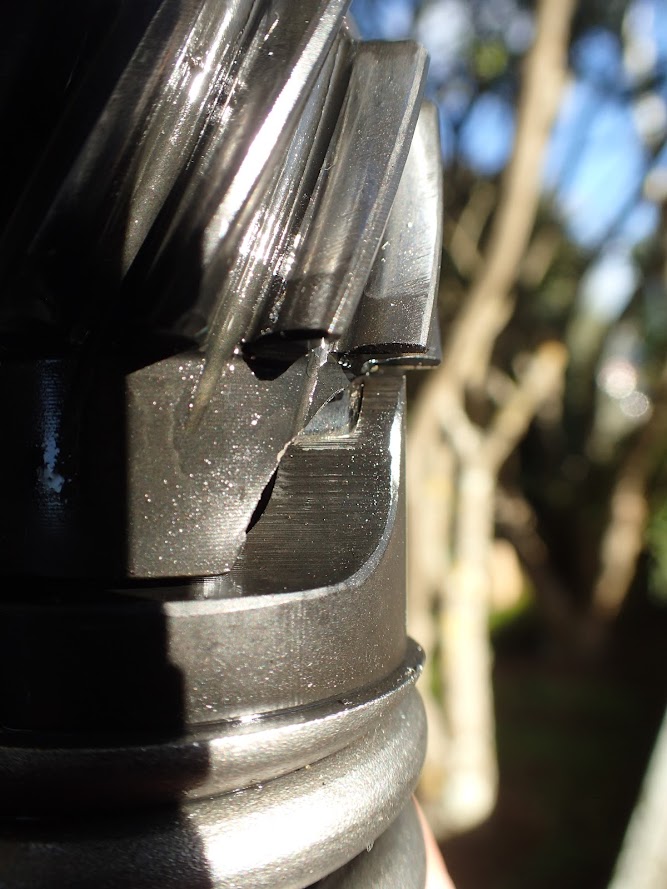 Whilst the Airhead gearboxes appear the same from the /6’s, they have had a number of upgrades. One of the major upgrades was in 1981, when the helical gears were changed from a 15 degree gear to a 17.5 degree gear. The 17.5 degree gears are marked with a ‘X’ to ease identification. Unfortunately those early input gear upgrades had an issue with wear on the shock ramps & in extreme cases the ramps or ears broke. These ramps were there to absorb some of the stress from over enthusiatic throttle applications & sudden down changes. In 1985 BMW made a final change to a thicker input spline & changed the ‘X’ gear & shock ramps.

Fortunately the trashed spare gearbox was available for me to pillage for part. The gearbox serial number indicated it was a post 85 box (one worry with older bikes is that the parts may have been swapped during their lives). I have to say that breaking the taper on that output shaft flange was the most difficult I have experienced so far. I was using a long cheater bar on the socket & it still wouldn’t budge. When it finally went it was with a loud crack – I thought I’d broken the output flange. 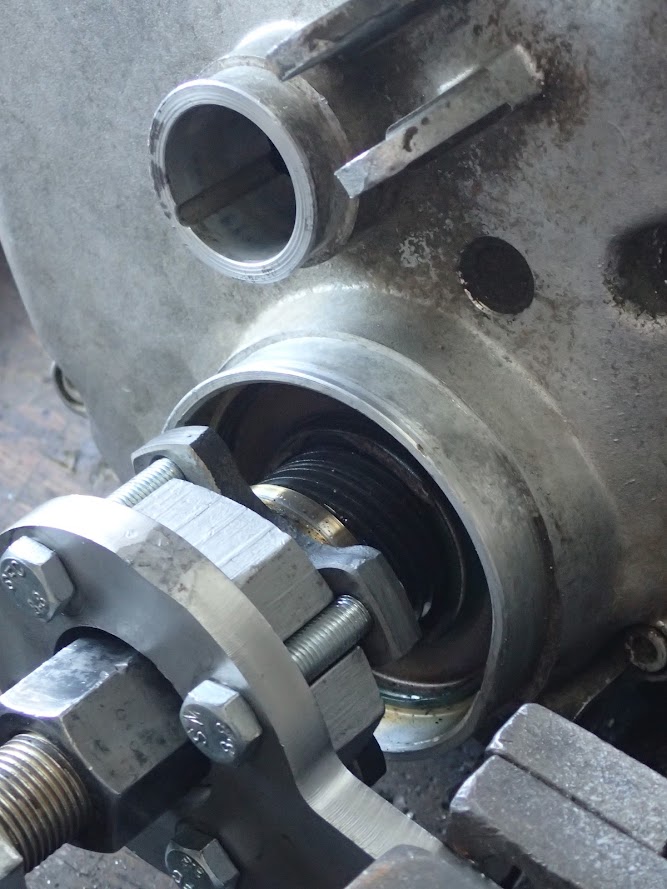 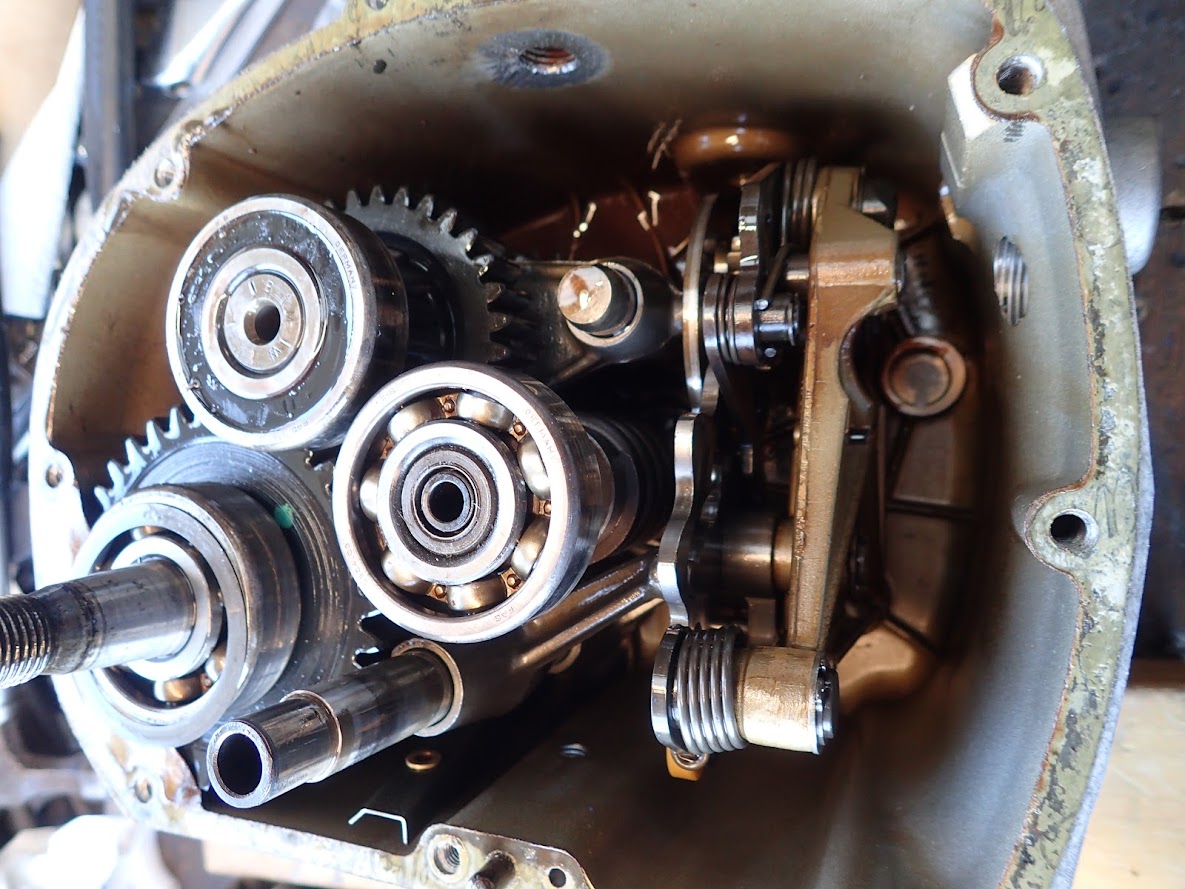 The spare gearbox is a totally different internal colour to the G/S gearbox. It looks like someone has been in the box before me. My guess is the PO ran the wrong oils, or didn’t change the oils when water was present, the whole thing overheated, & the bearings collapsed. I haven’t gotten into it enough to check it thoroughly. Certainly the three bearings I can turn are rumbley.

The input shaft appears in good condition, but I haven’t started to disassemble it yet. I’ve added a photo to allow you to see the differences between the early eighties & post 1985 assembles. The upgraded assembly on the left. You can see what I mean about the colour of components from the spare gearbox – look at the left spring compared to the right. 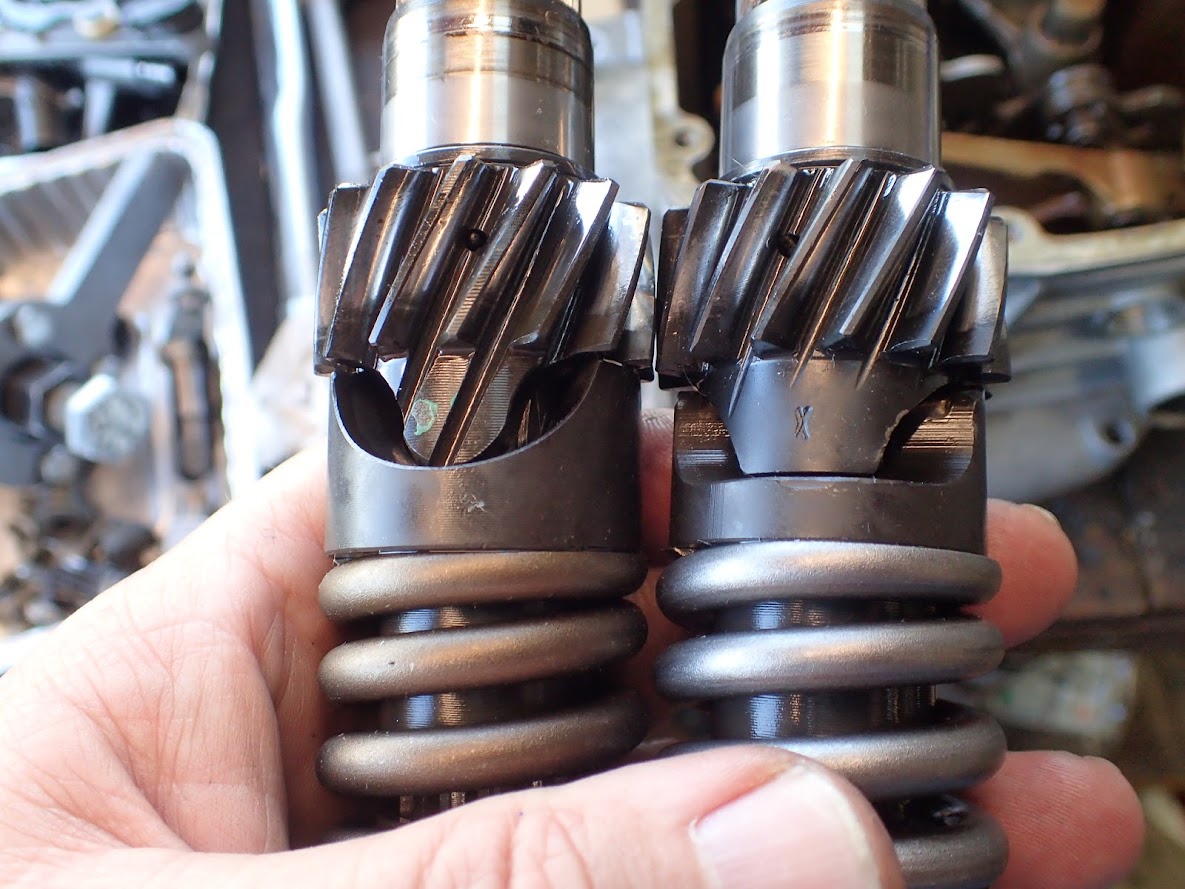 The spare gearbox is full of swarf & smells of heated metal. I’m pretty sure it was run for a while with dying & then dead bearings. Getting off the input shaft bearing was just about too much for the 12 tonne press.

So this is what GBP181.50 of gearbox parts looks like…Not happy about the price, but very happy that they are finally here so I can finish the gearbox build off.. 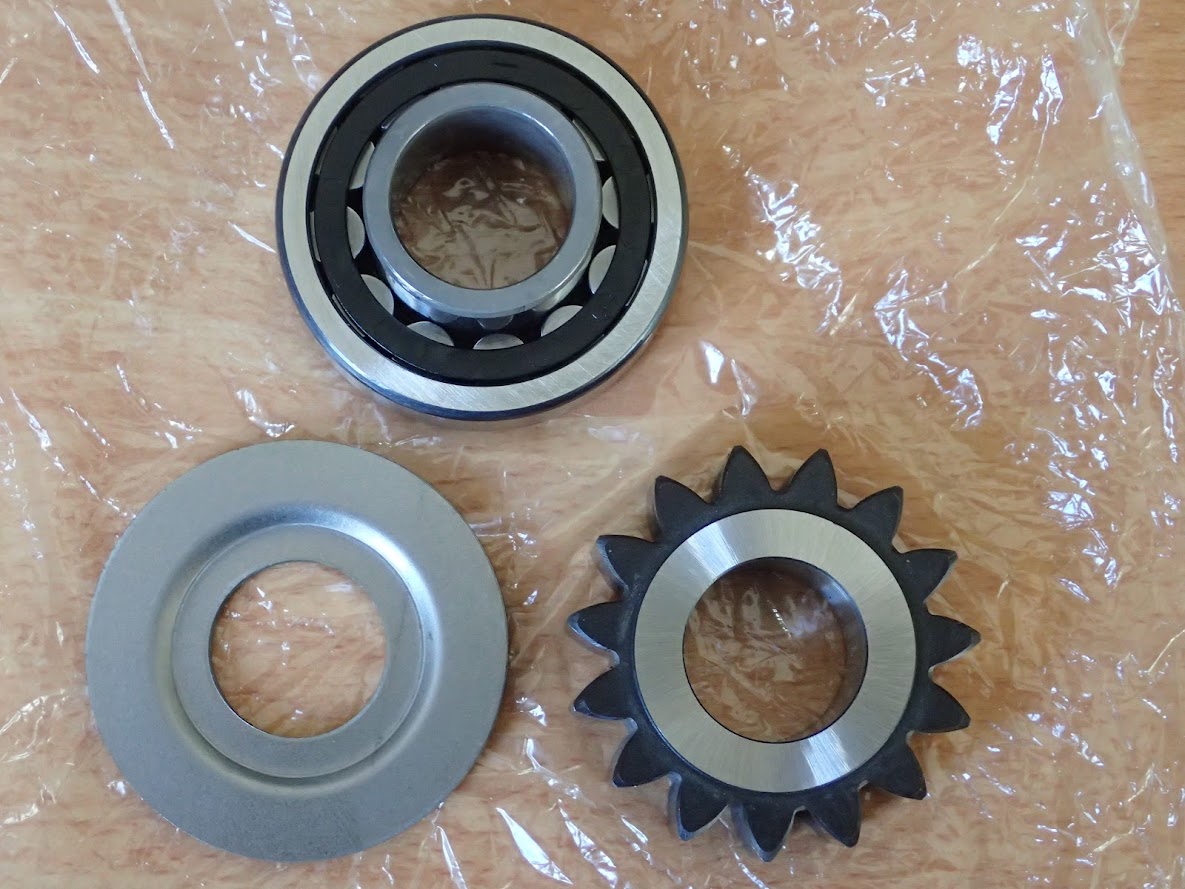