Progress update 19th Sept 18
New bracket for the speedo reed switch under the brake. Less than ideal for the rough stuff, but practical real world. The speedo line then runs up the brake line (which stiffen that). 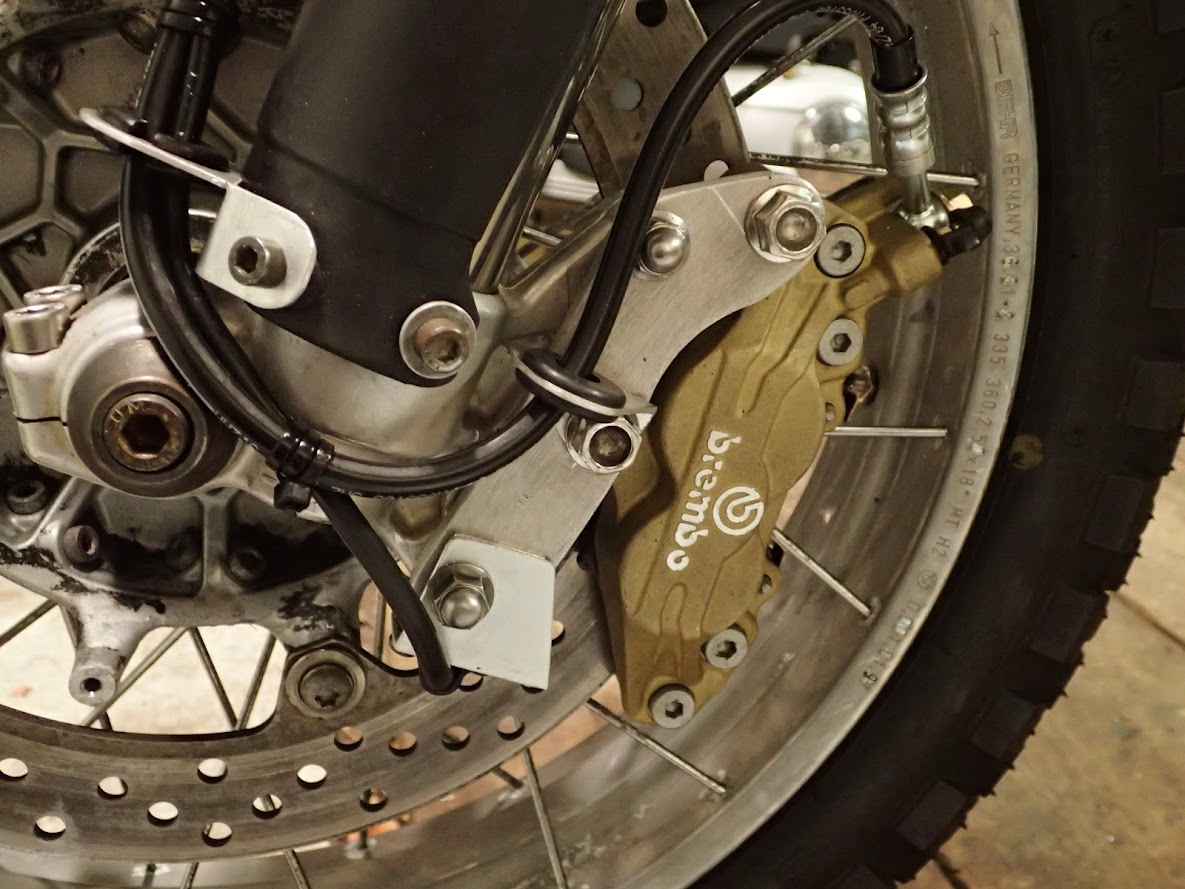 ‘New’ second hand tank holding mount fitted. The rubber mount at the rear of the tank is new, however, & created an issue getting the tank it to fit correctly. Eventually I zip tied the arms of the tank mount together (over fuel line), as these were spreading. I also replaced the rubber on the mount (with fuel line) to allow this to ease (with effort) over the frame backbone. 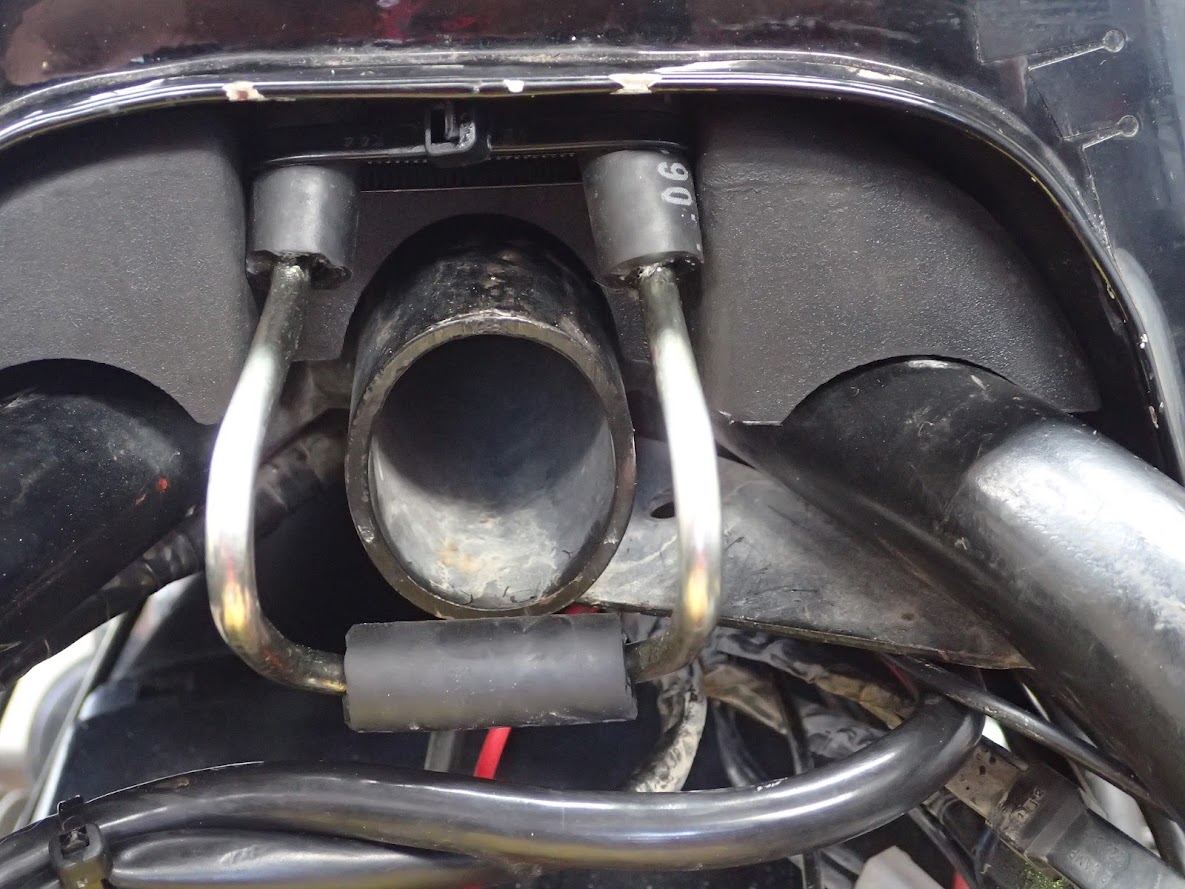 Fuel taps in place. Unfortunately one of the filter socks broke as I cleaned this, so need to get in another.

Swirled a bit of fuel in the tank to pick up any dirt, & to remove the oil coating the tank had been stored with. The fuel came back out ‘fairly’ clean.

Progress update 22nd Sep:
So after getting the tank to mount properly, turned on the ignition with an intent to do the first start and….no dash lights, no ignition. 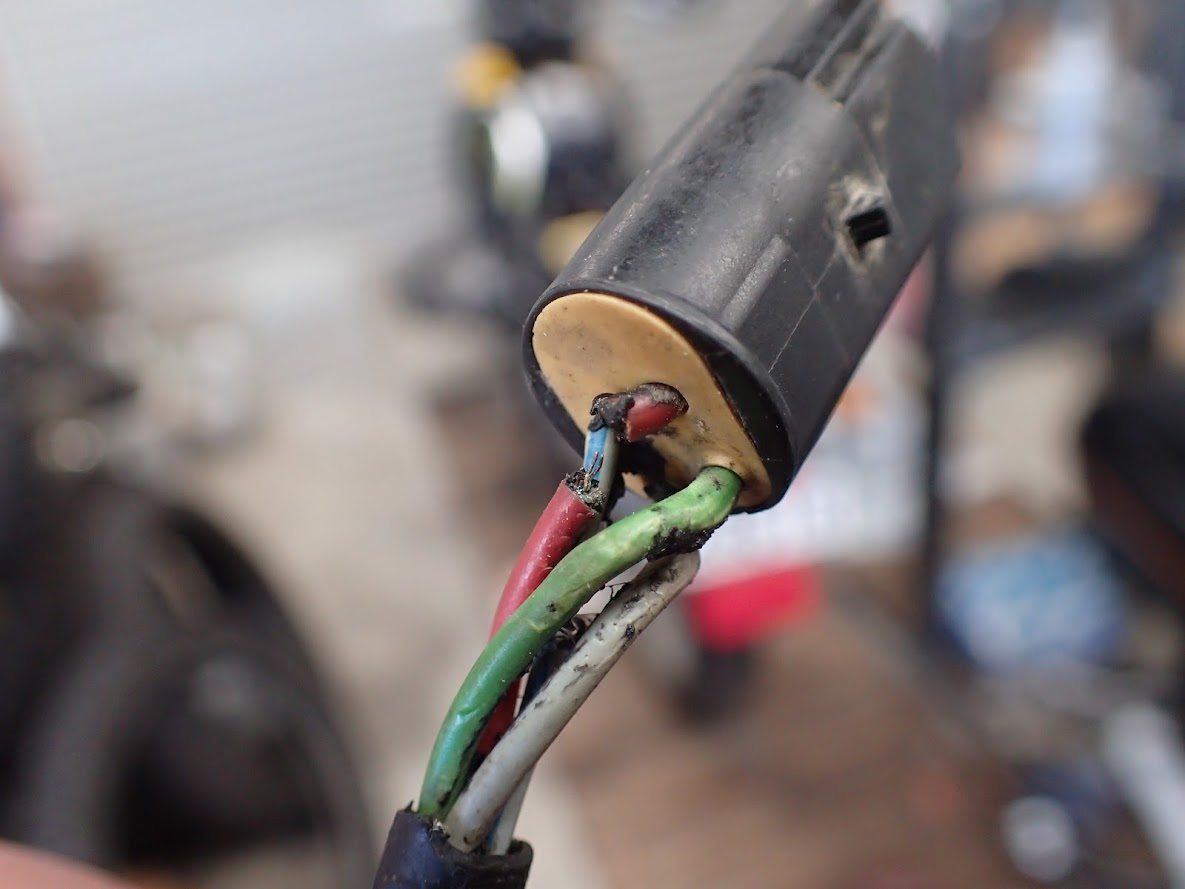 Investigated, & found the main power feed to the ignition key (coming up from the main wiring loom) had broken. Sealed connectors. Because of the positioning that would potentially mean tearing the main loom apart to fix with new connectors. Fortunately I have been able to replace with the ignition switch sub-loom off the bent bike. So we are away again. But the ignition is just zip tied to the handlebars as an interim measure.

First ride in the night (as a solo anyways). Does all the right things, shifts well, steers well (better than expected), brakes okay (but not brilliantly) – remember new pads. Also maybe a little bit of air left in the lines. Slight surge at small throttle opening, needs tuning out. Pissed fuel on the service station forecourt, which might just be junk making it’s way out from new fuel lines & dirt in the tank. We’ll see.

Progress update 29th Sept ’18:
Some bad news during the week. I was going to get new sidecar mounts made up, but because the tug has taken so long to get to rideable stage, John no longer has capacity to do this for me. That left me scratching my head, what to do about them. But after thinking about it over night, & looking at what I already have, I’ll just go ahead with the universal mounts, & put in some bracing onto those, to limit movement. Not the end of the world…

One issue that did need to be resolved was the right side front fork guard mounts had been stripped, & so needed to be repaired. That’s something I haven’t done before, & the mounts are quiet shallow, & blind, so I was concerned I might not have enough meat in the mounts to make an effective repair.

Got in a Helicoil repair pack. This comes with the drill bit, taps, 10x 6 mm (ID) helicoils, & the tools necessary to fit them. Just a case of drilling out the old mounts, tapping the hole, winding in the new coils, & breaking off the insertion tang at the bottom of the coil. Because the coils were slightly too long, I needed to cut the coil on the face of the mounts (once in), & then file those flush. Simples… 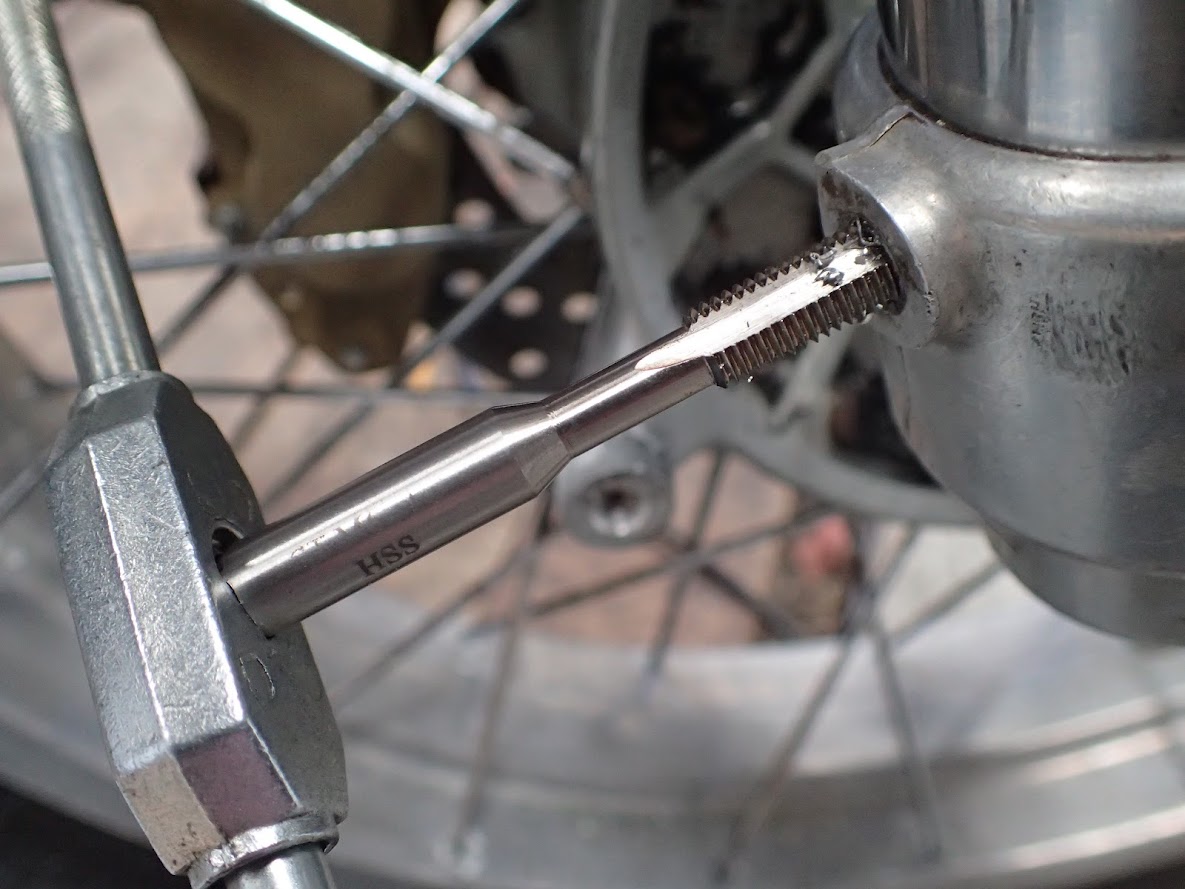 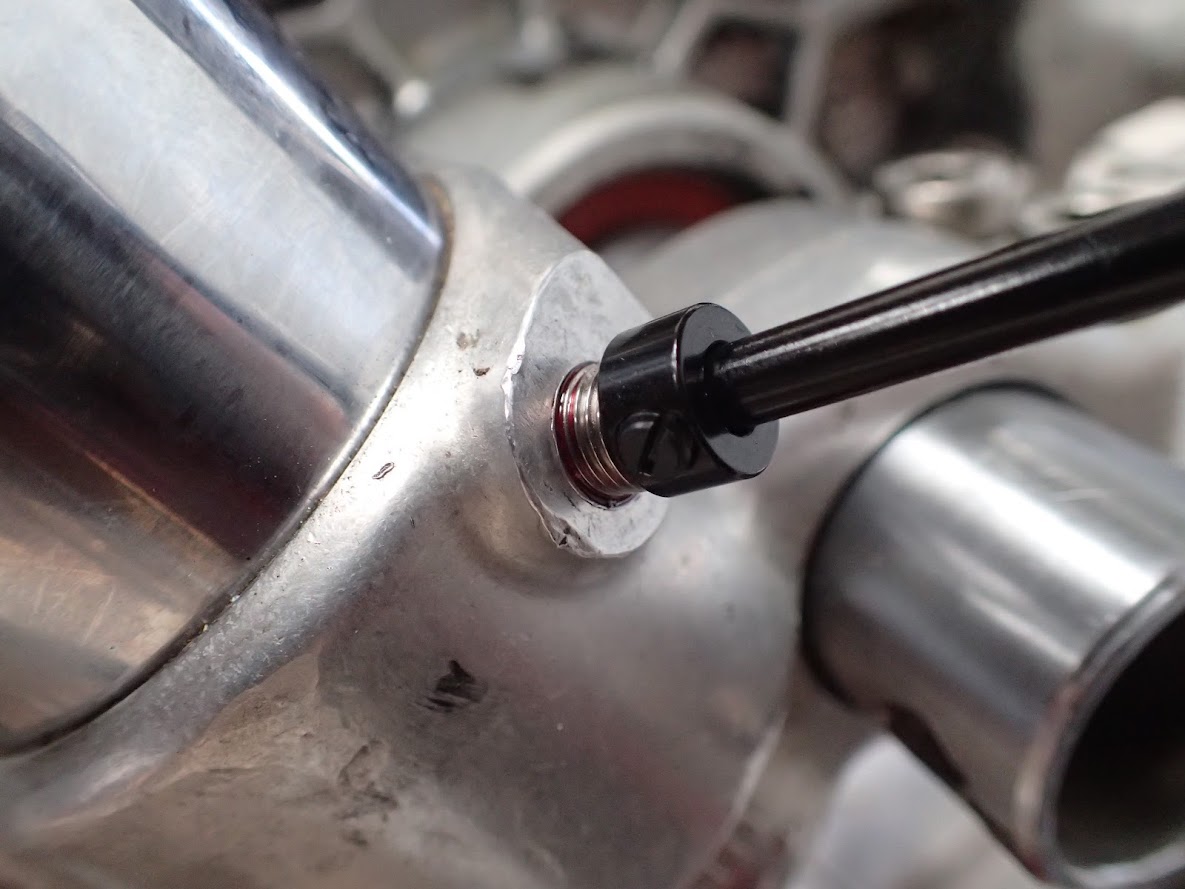 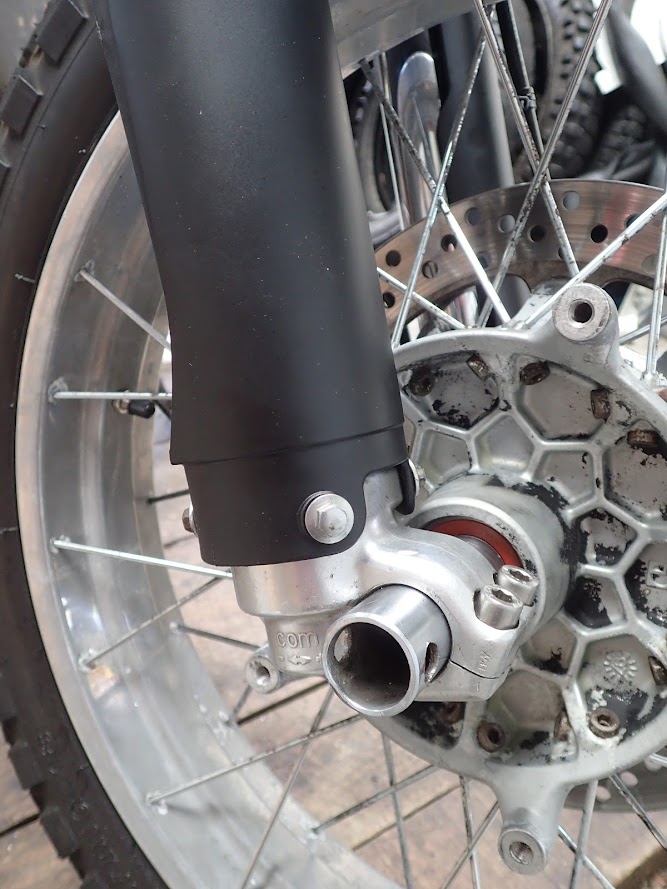 Kinda sorta got the sidecar attached, purely for testing purposes of course – the test course may follow the DGR ride Sunday. I already know the front end needs firming up at bit, & I need to rethink the lower rear mount.

Progress update 2nd Oct ’18:
Bit of a last minute thrash to get Gus upon & running with the sidecar for the Distinguished Gentlemens Ride. Worked quite late Saturday night, & Sunday morning I was out doing an alignment & fixing last minute details. Unfortunately in all that work I forgot to check tyre pressures, so the whole ride was run with 20PSI front, & 15PSI back. The sidecar tyre was fine.

Suspension was a bit soft on the DGR, so was looking at it today. Front suspension travel is 225mm (actually closer to 230mm), unladen (but with the tub connected) unused suspension travel 165mm, laden 138mm – 38.7%, target 25-35%, so need to firm the spring a bit more, & put in some preload spacers.

I’ll leave the rear for the interim.

Front brake has bedded in nicely, & I am happy with that (was concerned there might not be enough there).

Exhaust was doing a bit of popping at low RPM, so more jetting work to do. Or I may switch back to the SV1000 muffler. Still to decide.

Got in some metal this arvo, so will start to think about how I’ll deal with the revised rear mounts.

Need to wire in the sidecar lights.