Progress update 16th Oct ’18 – making up sidecar mounts:
I’m in the process of making more robust mounts for the sidecar (than what is provided with the universal Velorex mounts). Bear in mind some of this is prototyping. In particular the rear mounts. I’ll get something that works, then revisit at some point & make tidier versions. Any prototypes mounts will be replaced with fresh fabrications welded by a certified welder once the basic concepts are proven. If you see something that stands out, that could be improved, don’t hesitate to sing out though.

Generally connections will be clamps or bolt up (assuming there is an existing frame structure I can connect to).

My ability to fabricate is limited:
– I can only arc welding, & my welds have been… um, variable in quality. Any welding would be limited to the mount brackets I make up. Any welding on the frame structure is a no no. Mounts are all in steel, or use the existing mount clevis bolts.
– I have no access to a lathe
– I am limited in the steel I can use: 16mm 2mm wall tubing, flat strap 10x2mm, flat 50x10mm, tubing 38×2.6mm (which I would need to get in a hydraulic bender to bend).

My welding has improved dramatically, because I’ve purchased a proper welding helmet, with an auto darkening visor. No more welding by braille. And I’ve bought a cheap chinese drill press. What a jump up from my handheld drills. Especially through 10mm steel.

Top front:
The front top will stay as is, except I have added longer bolts & locked them in place with nyloc nuts. The orginals had shorter high tensile bolts into tapped clamps – I felt there was room for movement due to different materials used. 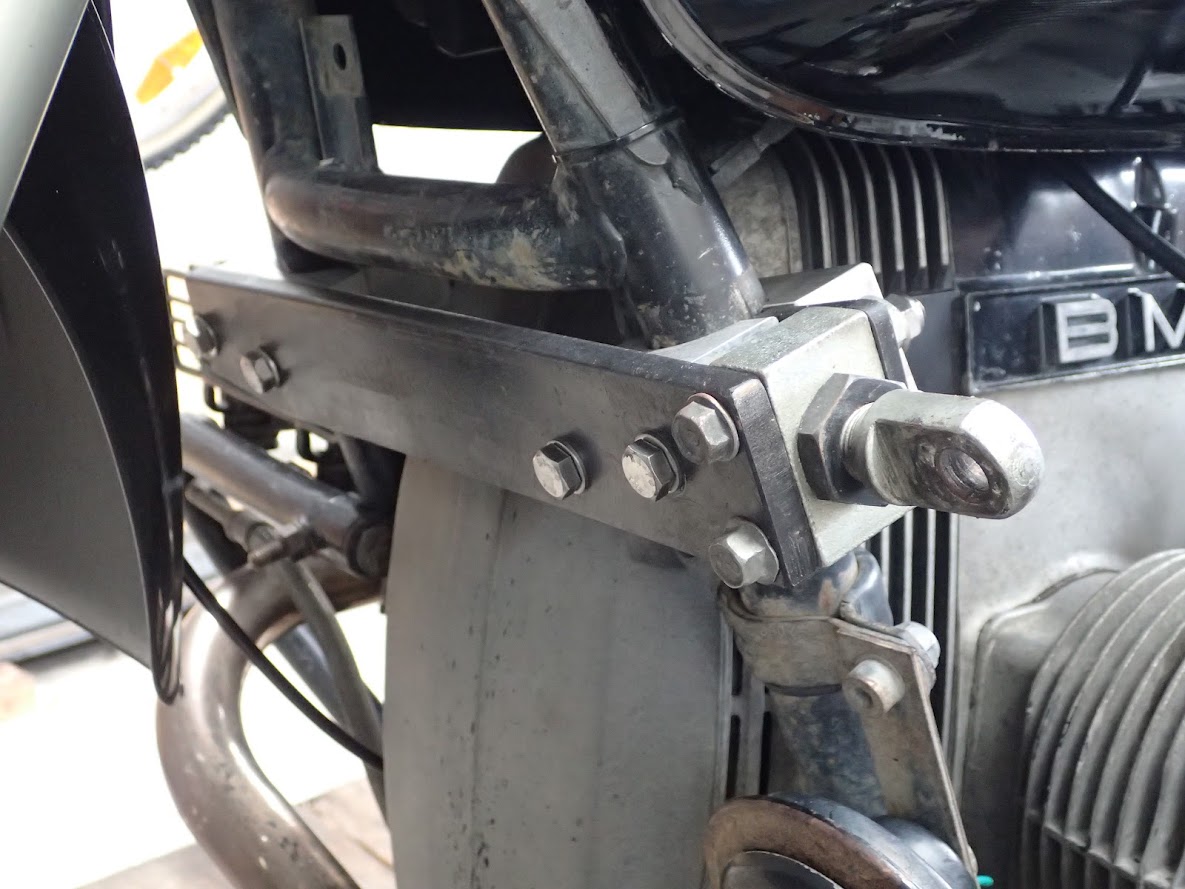 Bottom Front:
The bottom front clamp is on a plate bolted to the front engine mount. No real potential for movement there, except for some spinning around the engine mount – unlikely given the clevis will hold it vertically. And there is only potential for movement if the mounts are not torqued to spec. The location of the mount results in any stress being spread across the frame thru the engine mount, and is at one of the strongest points in the frame. No photo.

Top Rear:
For the top rear, I will use the universal clamp to the frame, but with a bolt up mount to the frame to stop any potential for the clamp to spinning on the frame. Positioning is not ideal, but at a strong point. I may rethink this at a later iteration. Ideally I want this to spread stress across both sides of the frame. 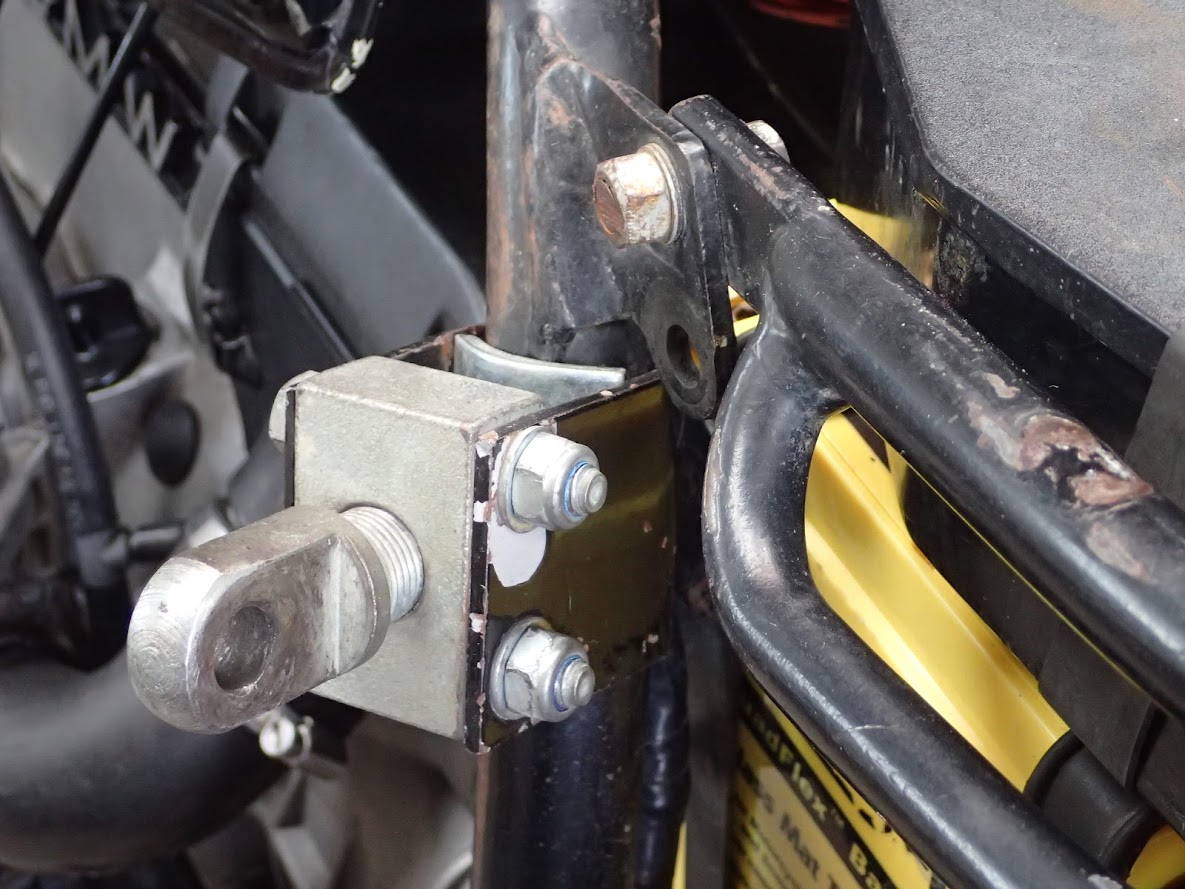 Bottom Rear:
Bottom rear is problematic. I used the universal clamp for the DGR, off the bottom of the frame – that was too far forward on the sidecar frame. It worked, but didn’t feel ‘solid’.

The rear mounts are evolving, & I’m fortunate that I have a spare (wrecked) frame that I can try ideas out on. 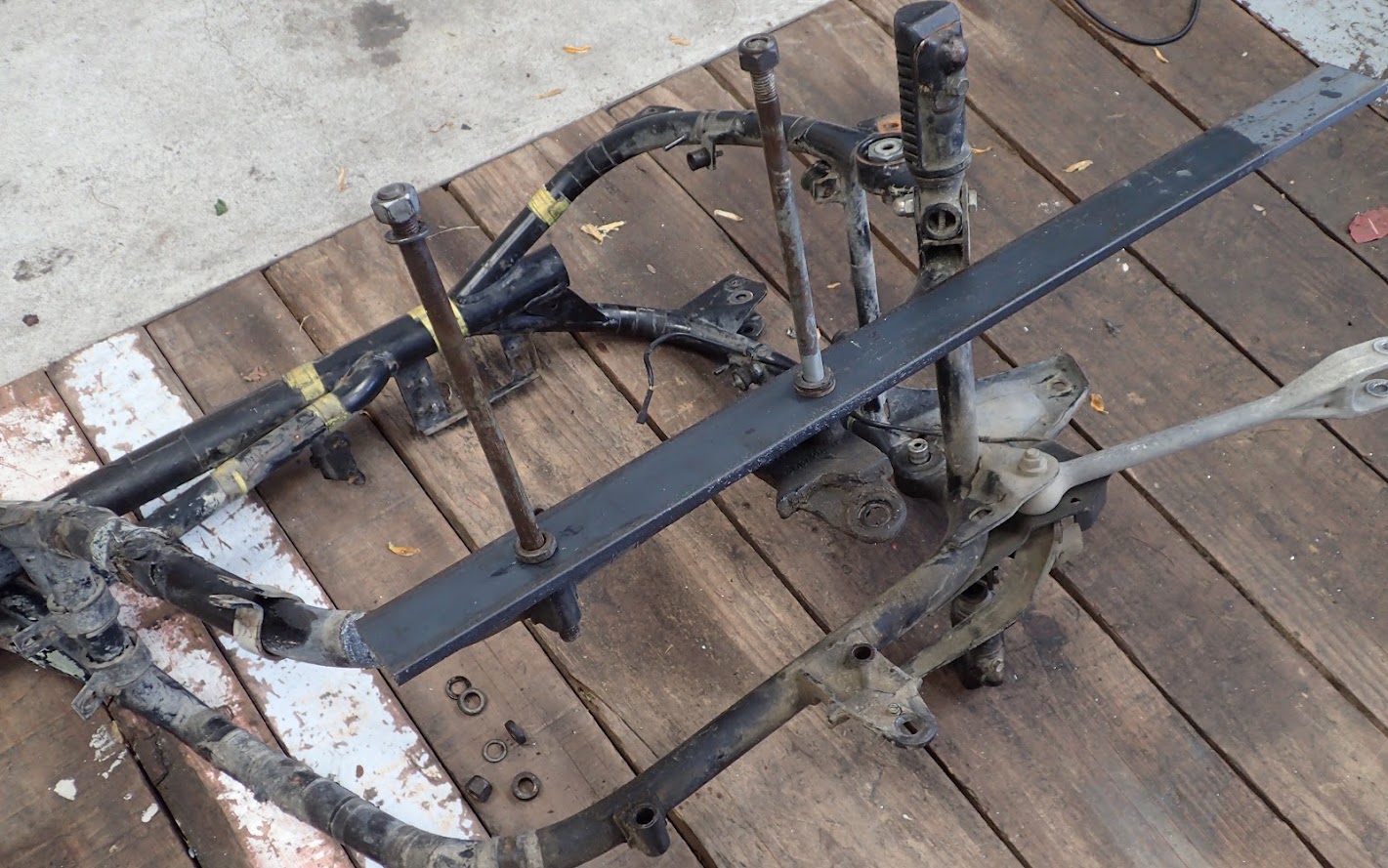 Originally I thought to use 50x10mm flat plate (spars) across the mounts – but the gear change boss on the frame, & the accompanying gear change mechanism) gets in the way. One way around this is to use an earlier gear lever without the linkage & bore a hole in the plate for the boss (or cut it off completely, which I am loathe to do).

A second iteration used a parallel spars on either side of the LHS frame, again using the engine mounts. That bolt up concept again. The ‘bottom’ spar between the frame & engine replaced the engine mount spacers. These measured in at 9mm front left, & 6mm for both rears & the right front. This arrangement pushed the engine across the frame to the RHS a minor amount. The difference was made up with washers. 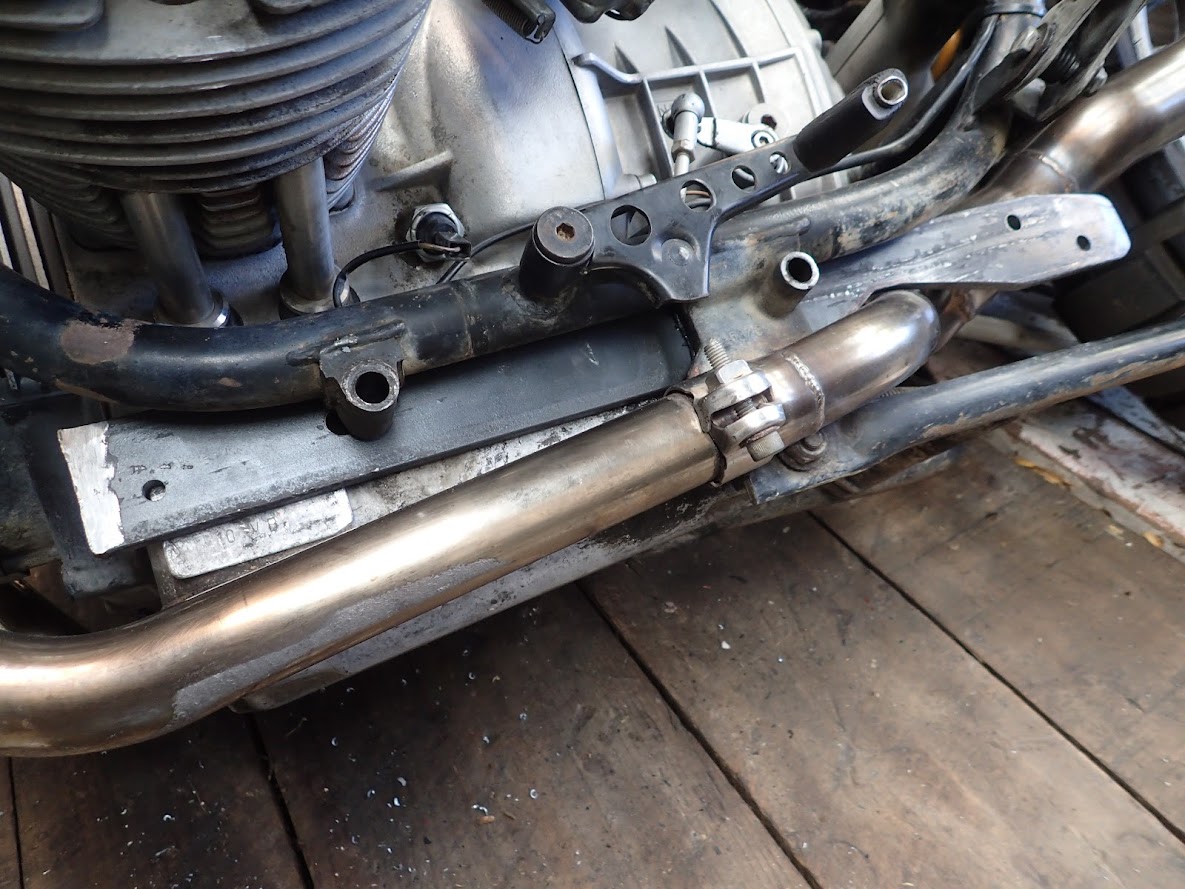 The ‘top’ spar only picked up the rear mount (because the gear change issues noted above). Behind the frame I was going to use a couple of 12 mm bolts & tubing to link the spars, to maintain spacings & prevent flex. This ran into issues with the exhaust position, but that was resolved with cut outs. It failed when I realised I could no longer pull in the clutch arm, as the shift in the engine had absorbed some of the arc the clutch arm needed to operate. I could have ground down the clutch arm slightly to get clearance but the limitations of this approach were becoming clear.

The next iteration used the top spar, but mounted to the bottom of the footpeg mount. This has some issues as over tightening the footage mount will stop the footpeg folding up. So it will be braced at the rear across to the Paralever arm, & up to the rear subframe mount. Still working on that… 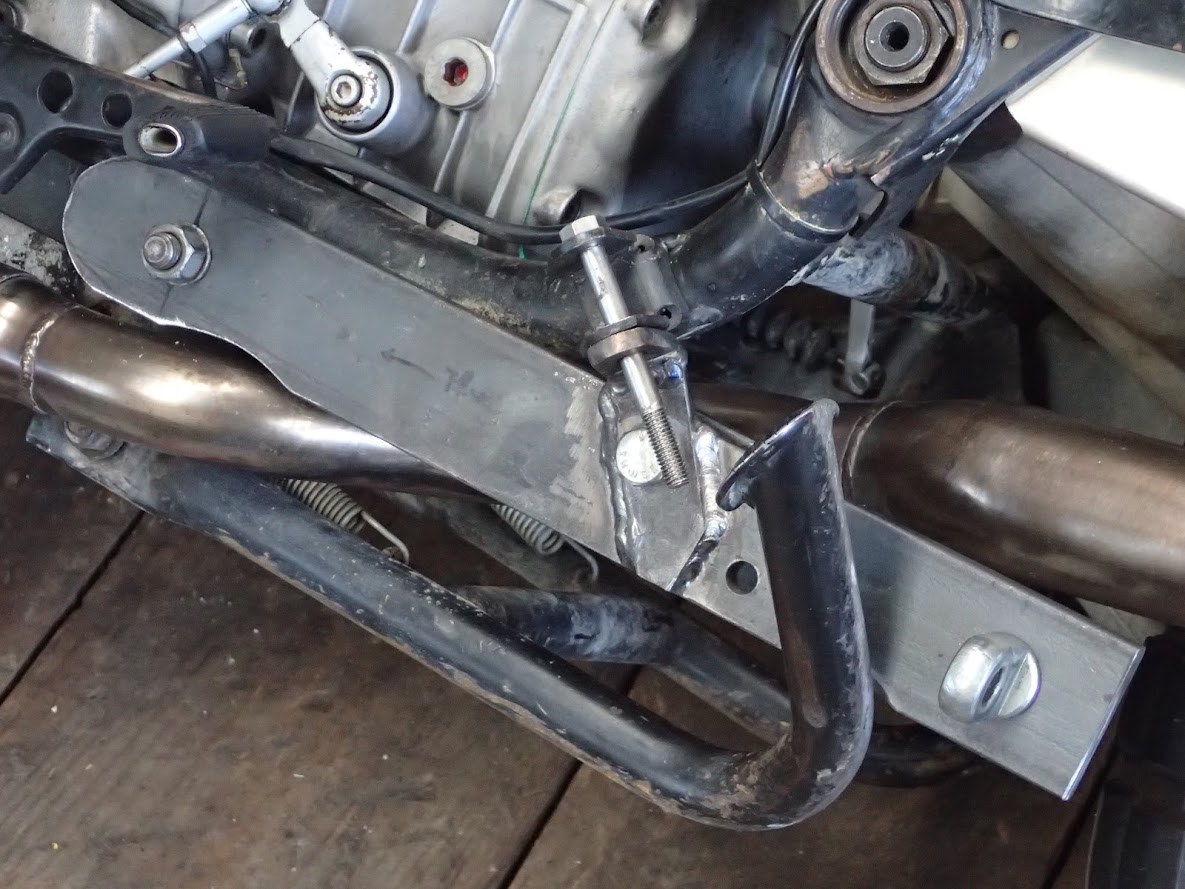 As I said, work in progress…

One other area that will need to be addressed is the rear bottom clamp on the sidecar frame, which also has a habit of spinning.