Progress update – 4th Nov. Engineered sidecar mounts
At the conclusion of the last post Ken from a Better Boxer Co contacted me, & offered to assist build a better engineered set of sidecar mounts. He may also have been motivated to do this given I’m supposed to be riding with him on a South Island sojourn. I think he’d prefer not to pick up a mate off the pavement. That would be inconvenient. What ever the reason, it has been damned good of him to help me out.

The first step was to nut out a design for the mounts. A right side sidecar mount is relatively easy, & well documented in the interweb – a left side mount has a number of obstacles to work around. Those include:

– Gear change & foot peg arrangements
– Exhaust (on the GS & G/S in particular)
– On the GS, the lack of a left passenger footpeg gives a challenge for rear mounts.
– How the mount interacts with the frame, and
– Where the mounts can bolt or clamp onto the frame.

We looked at a few iterations of the design, but the final one closely mirrors what is commercially available for RHS chairs. 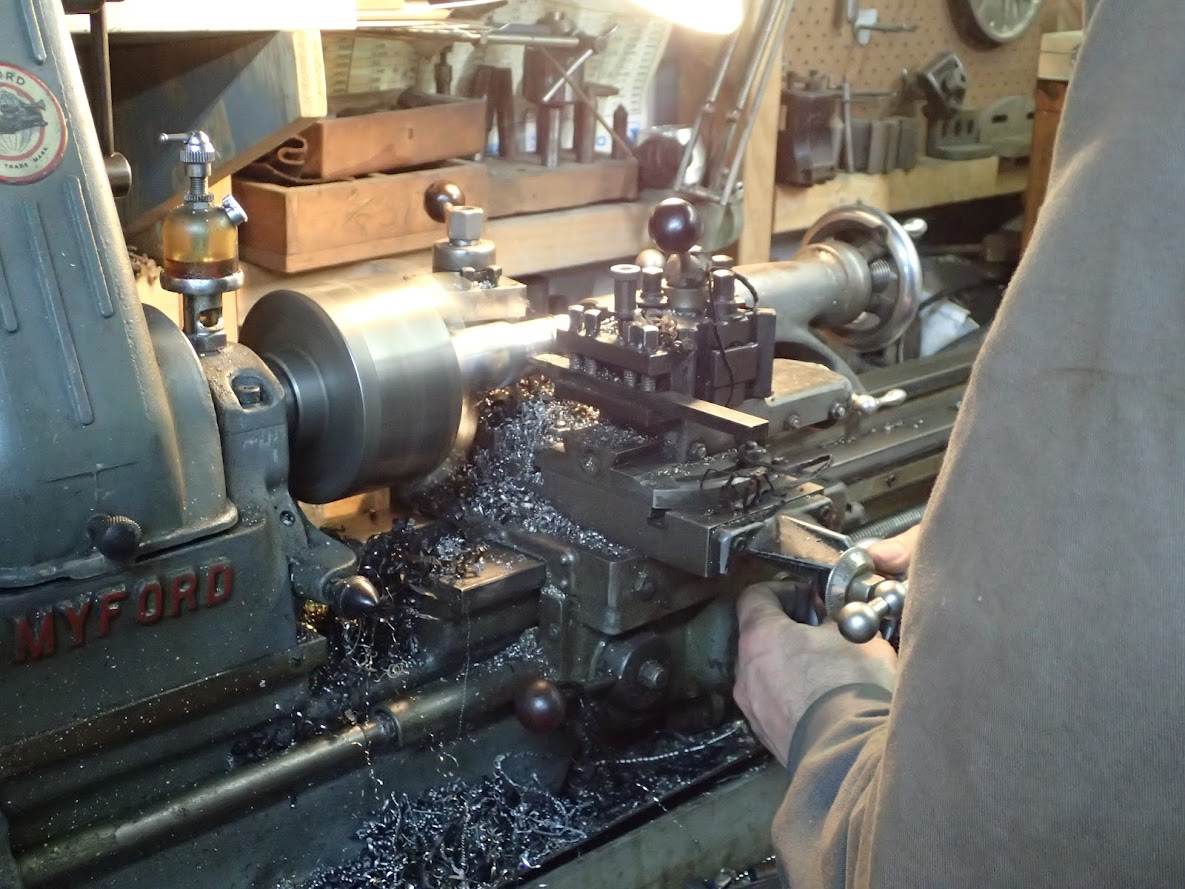 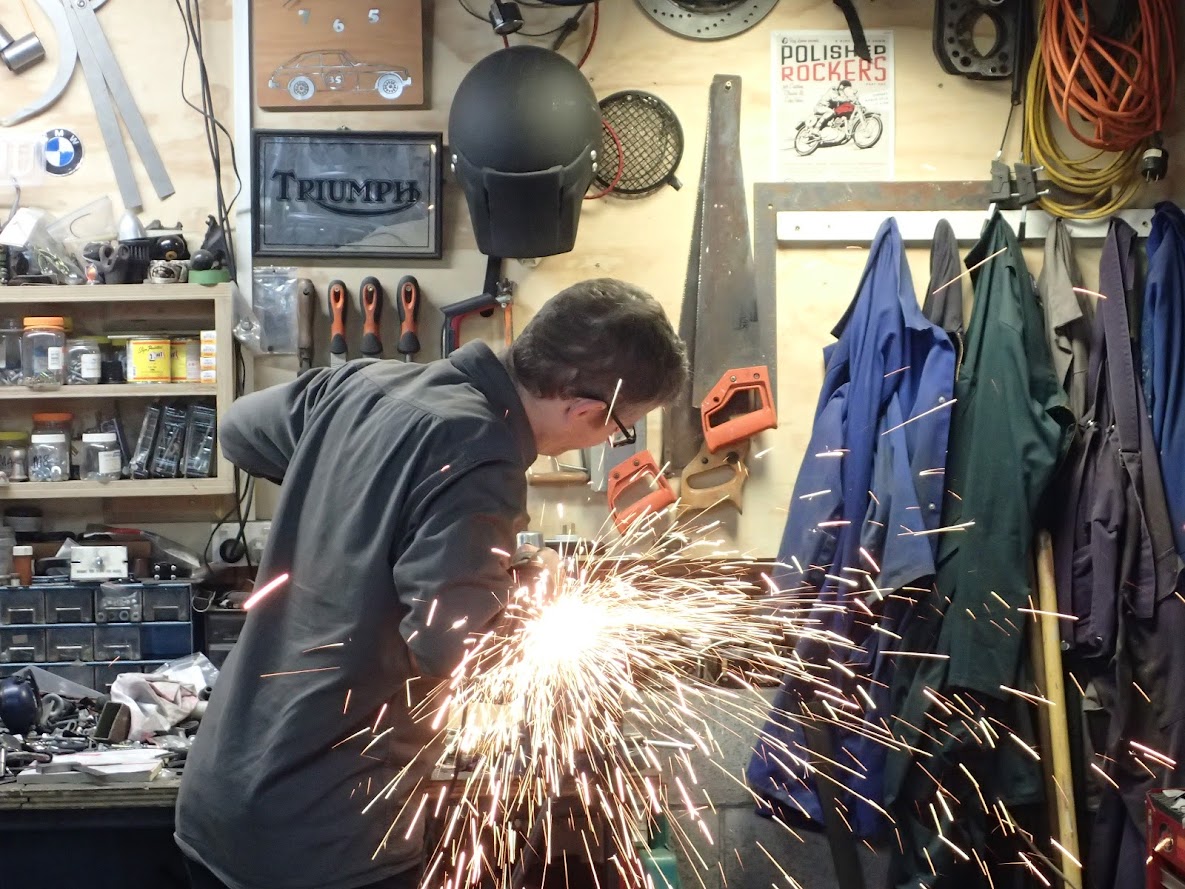 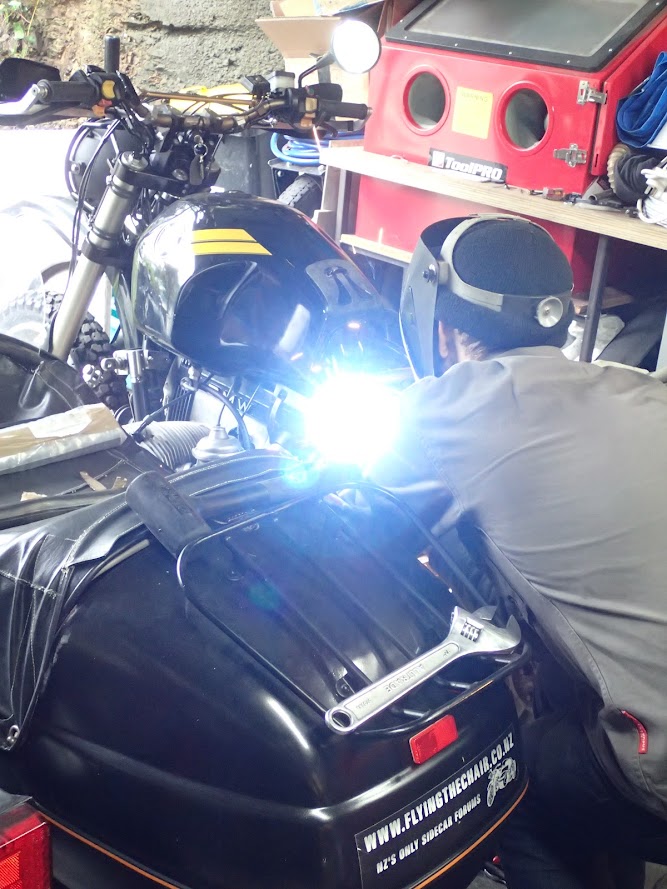 We’ve used 38mm 2.6mm roll cage tube at the bottom, running just above the frame, with welded ‘U’ channel down to the engine mounts. The tube is then bent under the footpeg, The bend clears the exhaust & picks up where the original spar would have placed the bottom rear mount. The front bottom mount is marginally higher than the original, & somewhat forward. This changes the sidecar lead a small amount, but was better for the top front mount pick up. 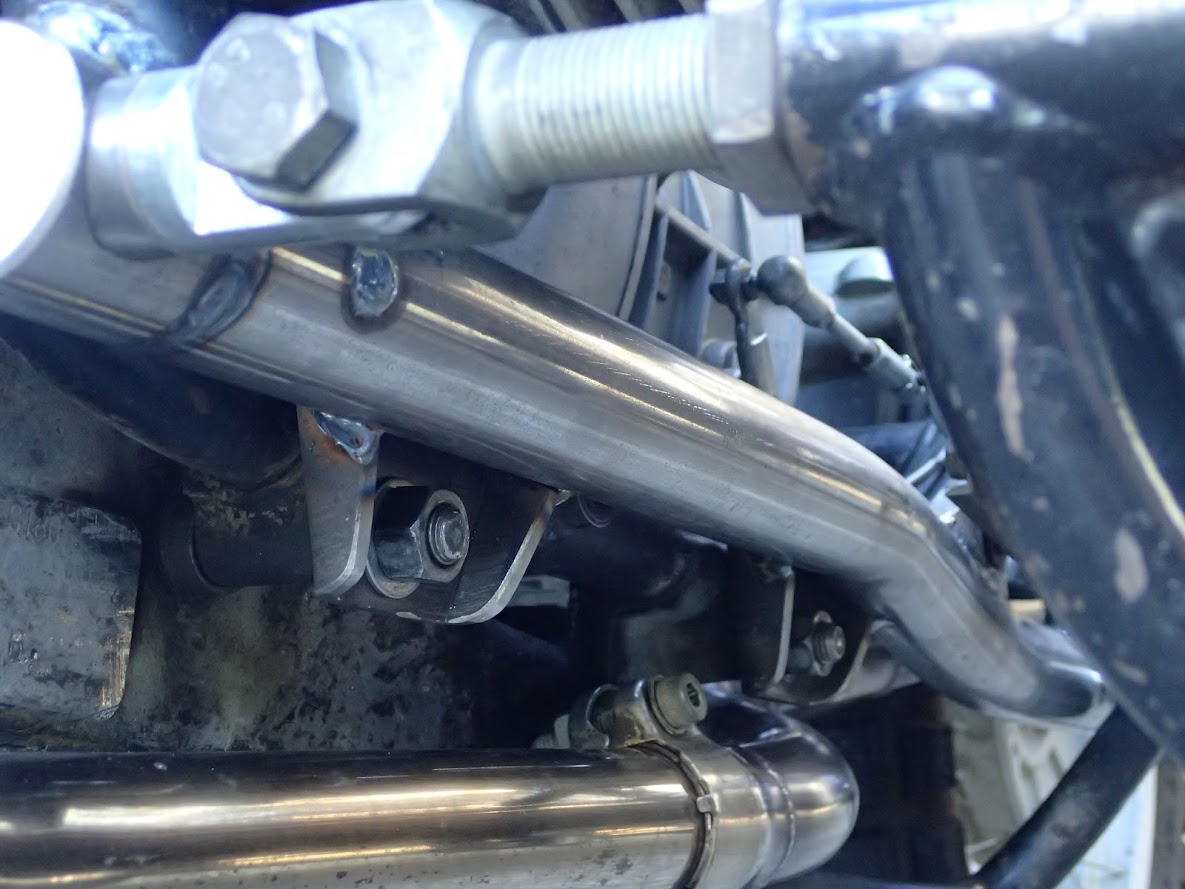 The top front mount remains ‘as is’, except we’ve added a tube running down to the bottom front mount. This strengthens both mounts by stopping any frame twist. The tube picks up the top mount using the existing mount bolts (tapped into the new tube steel ‘slug’). 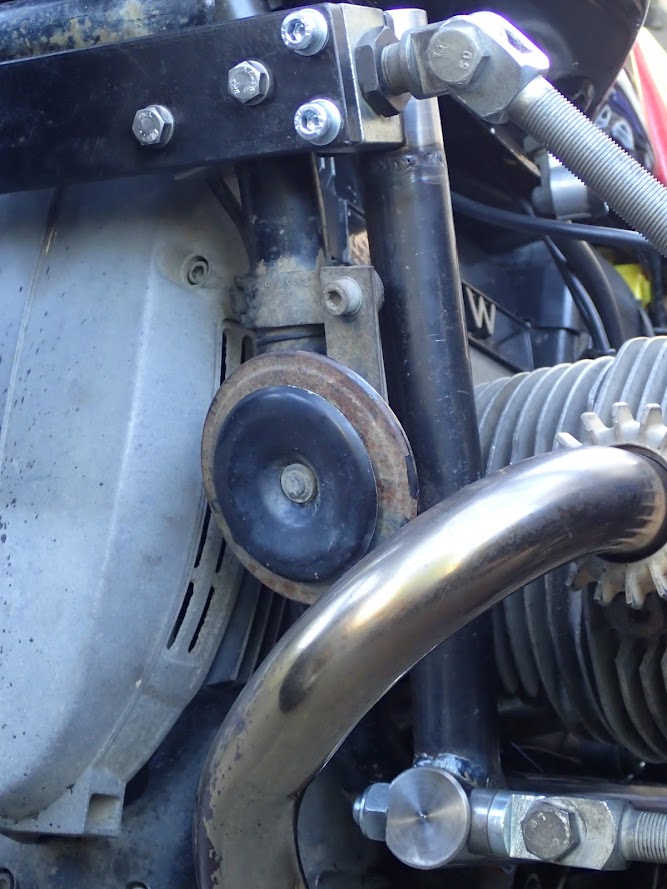 The horn will be relocated back up the frame nr the steering head, given the mount tube already partially restricts airflow to the LHS barrel.

The top rear mount sits on a clamp to the left rear downtube, linked down to the bottom rear mount by more welded tube. 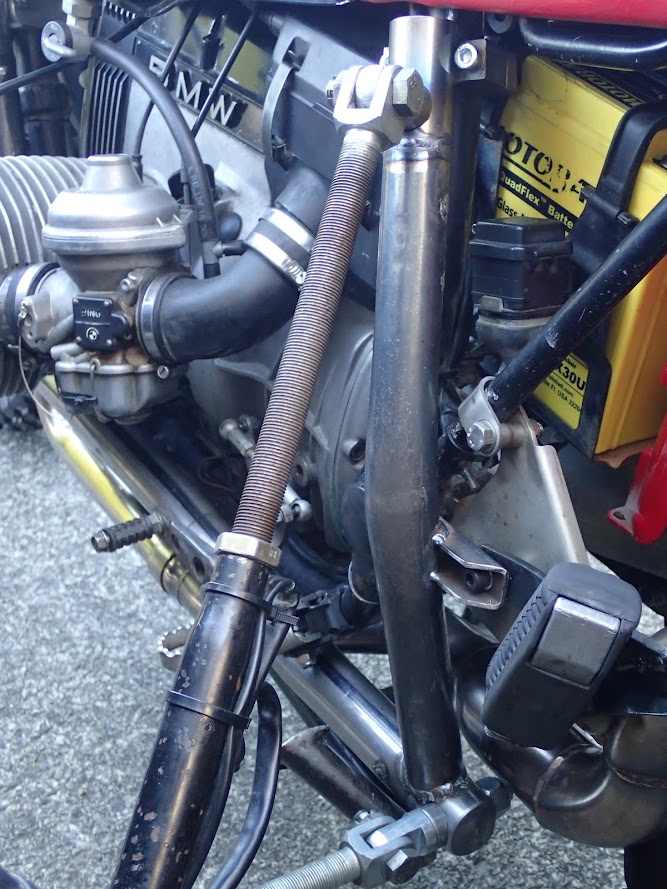 The load is spread across the frame from an existing frame tab to the top shock mount. This is positively positioned with a saddle arrangement across the top of the shock mount. 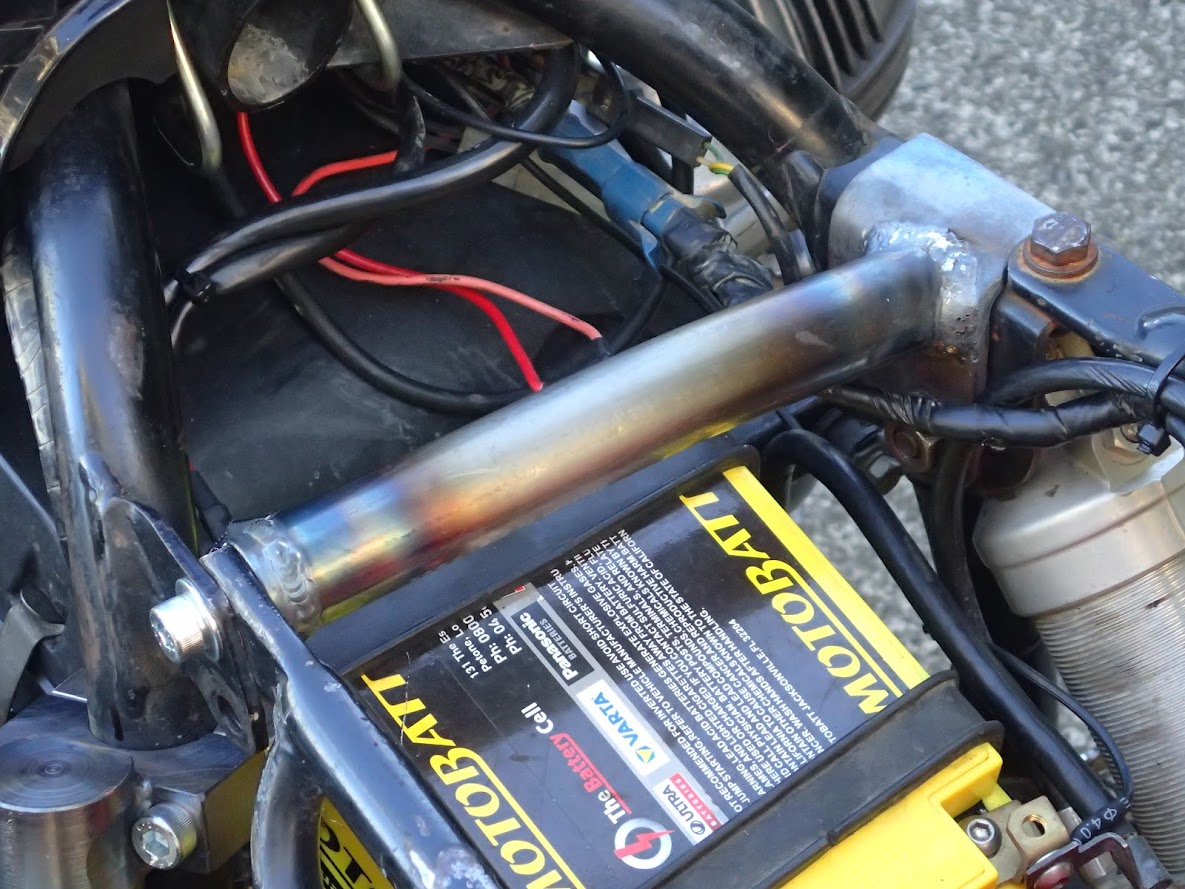 The tube running from the top rear mount to the bottom rear mount is kinked to clear the frame, & then linked to the main frame with a weld in ‘T’ piece of u-channel, which picks up the subframe mount, & on the other side of the tube also provides a mount position for the rear pannier frame. 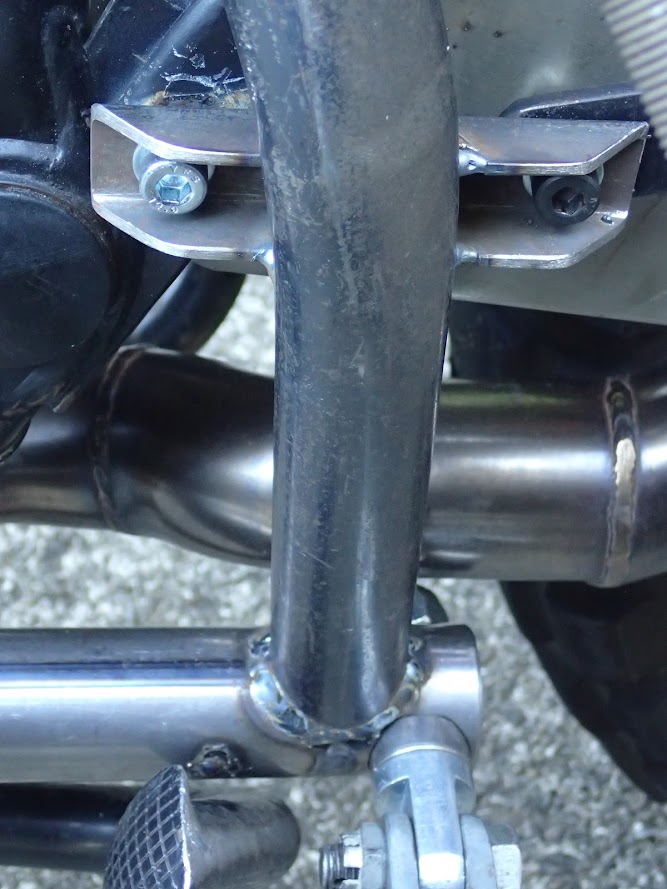 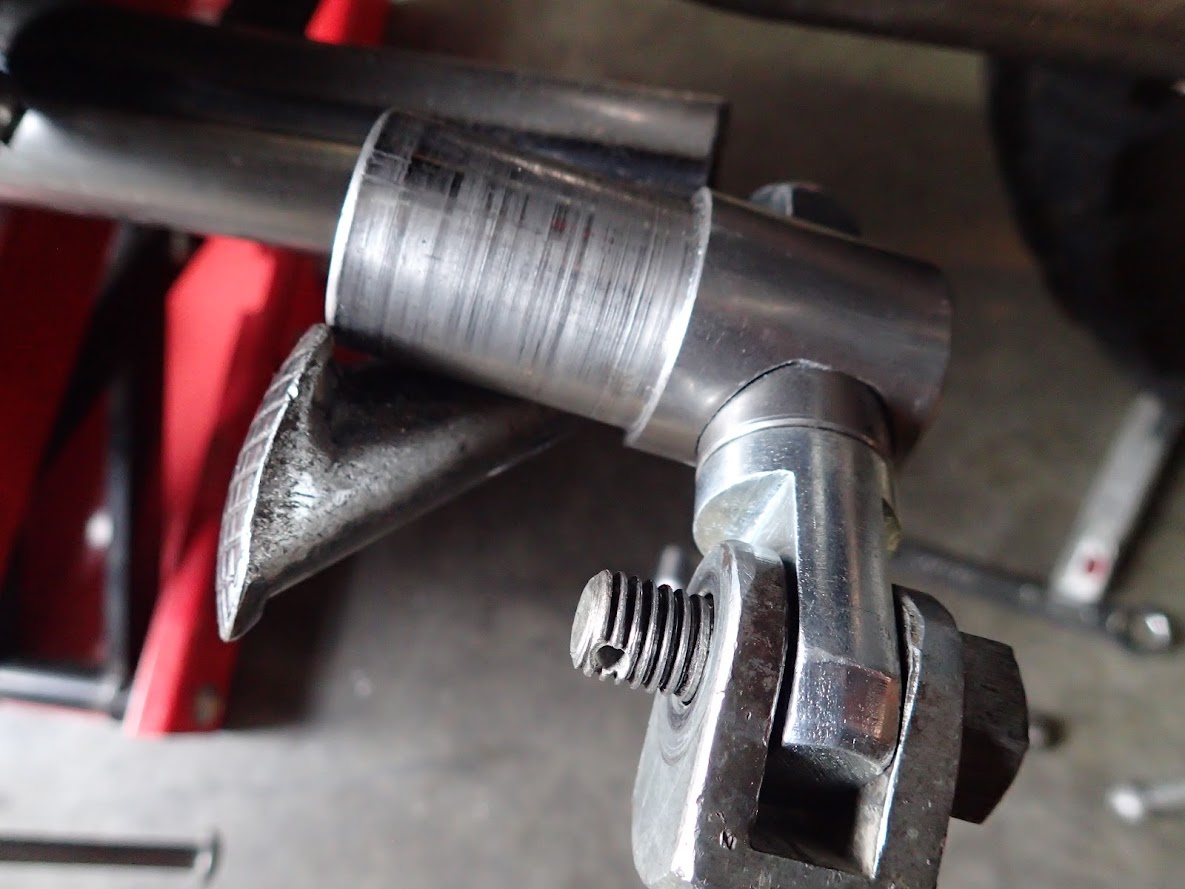 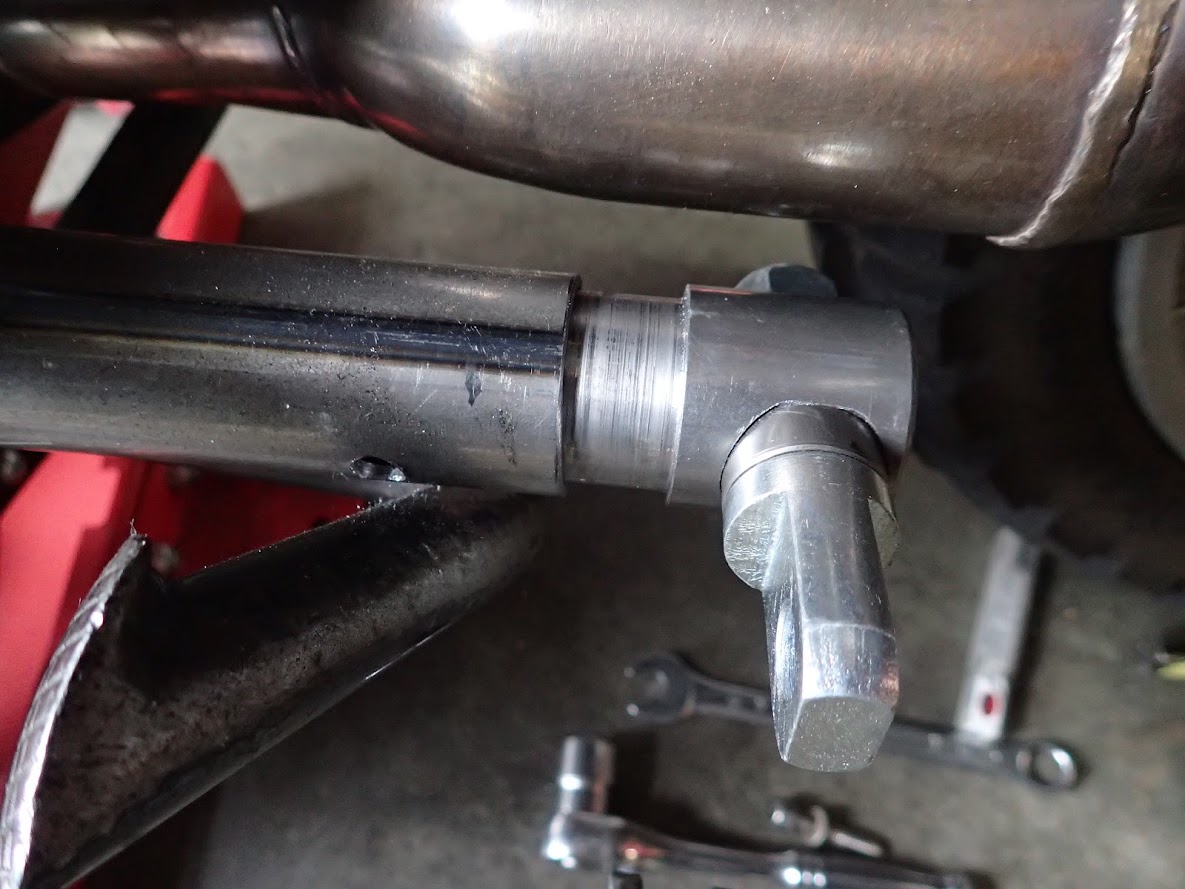 The gear change was a potential problem. That has been partially resolved (still a work in progress) with the gear change linkage from the RT, & a cut down GS lever (the RT lever placed things in the wrong plane). A new boss has been welded onto the top of the sidecar mount just in front of the footpeg. This may need fettling – the throw is very short at present. 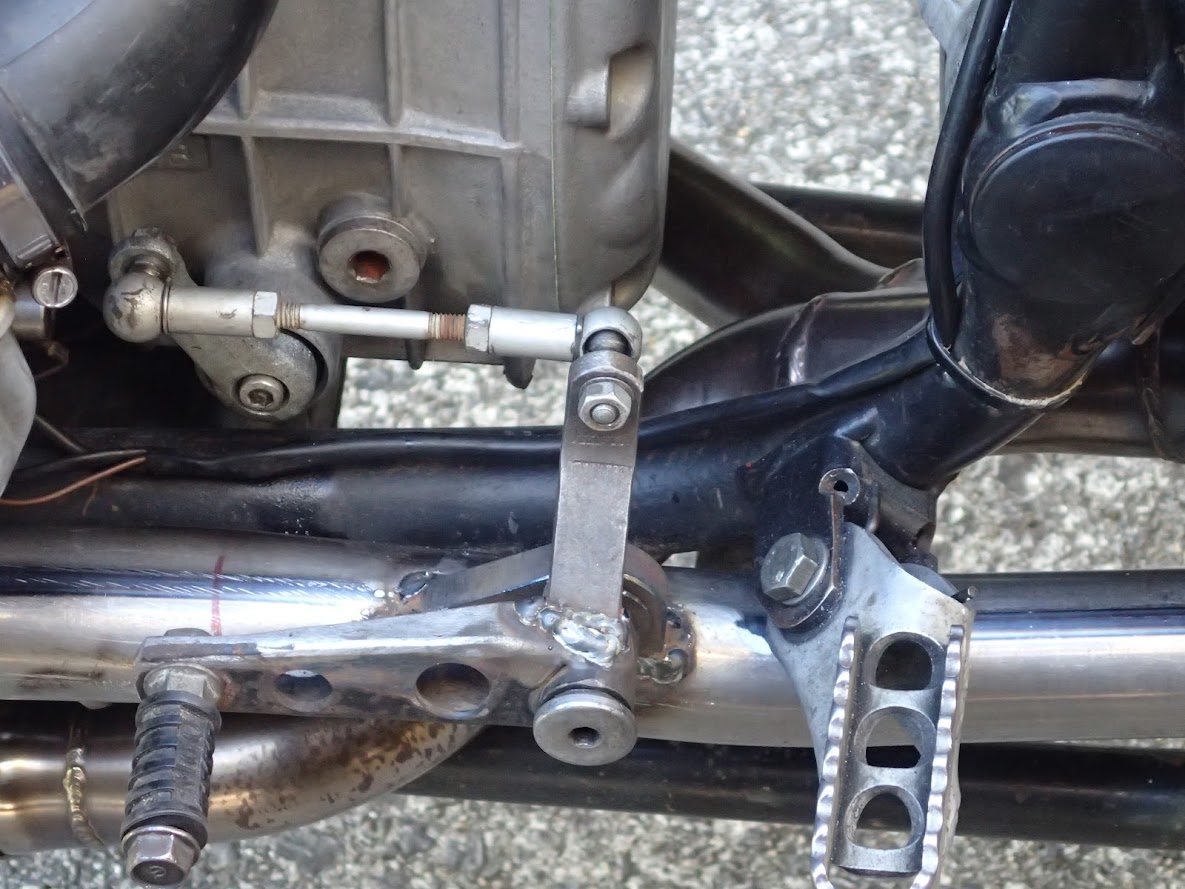 The footpeg feels okay, but may need to be extended outward at some stage.

Next on the agenda is stripping the mounts down & painting. I’ll take a photo of the mount in isolation during that process.