FIXING THE DAMAGE FROM ‘THE SLIDECARS IN THE TOP OF THE SOUTH’ RIDE.

As you may be aware, Gus sustained some damage from the Slidecars in the Top of the South. The majority of this damage stemmed from not cycling the forks through their full travel during the initial build. If I had done so I would have realised that there was insufficient clearance between the fork tops & the disc bolts in the last few cms of full compression. The other major contributing factor (to the fork damage) was that the fork springs are still slightly too soft for the ride.

On the ride, the early indicators were:

– That the speedo magnet was ripped from the mount, then
– The spring clip that the fork guards ride on was shifted from its normal position, then;
– A few hard hits, where I noted that the zip ties I was using as fork maximum movement indicators forks weren’t getting to full compression, then;
– Damage resulting in the dust seals being pulled out of the fork tops, then;
– Damage resulting in fork oil spewing onto the front brake. 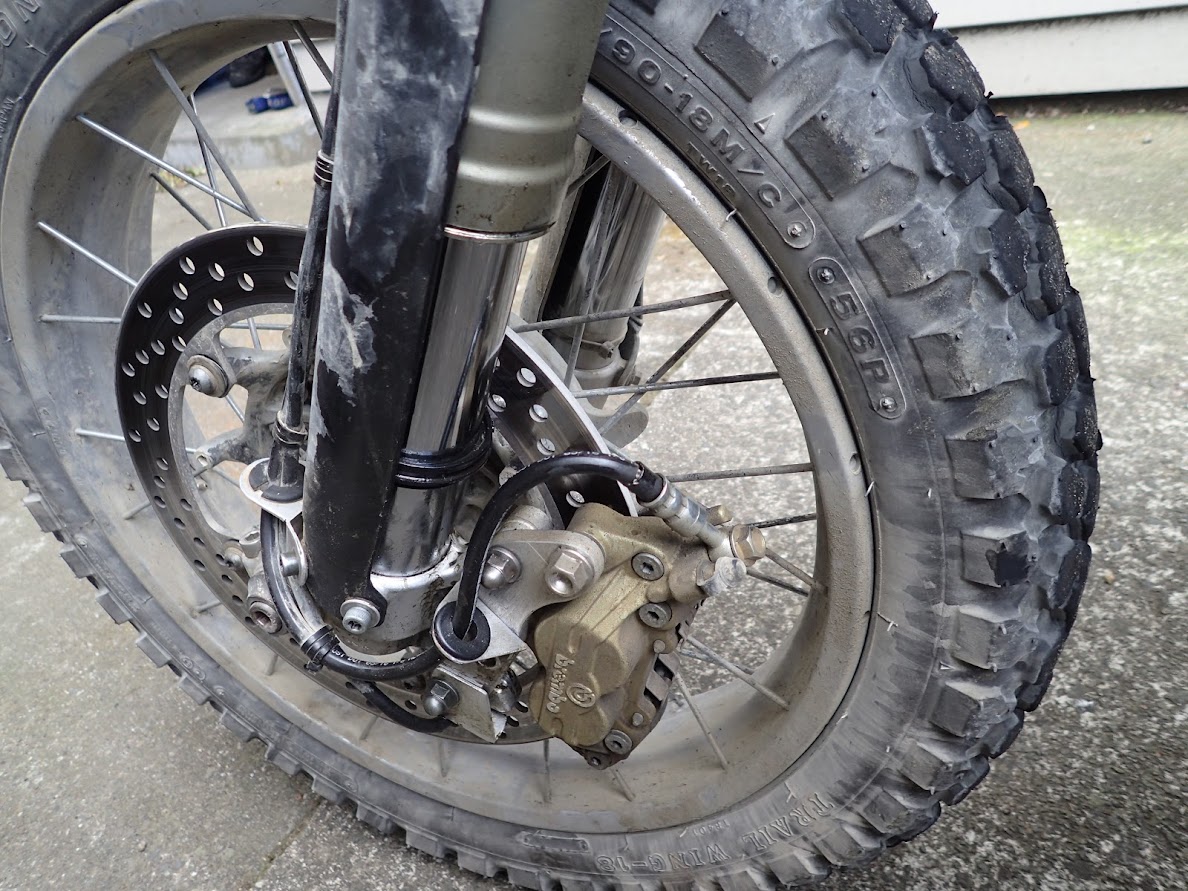 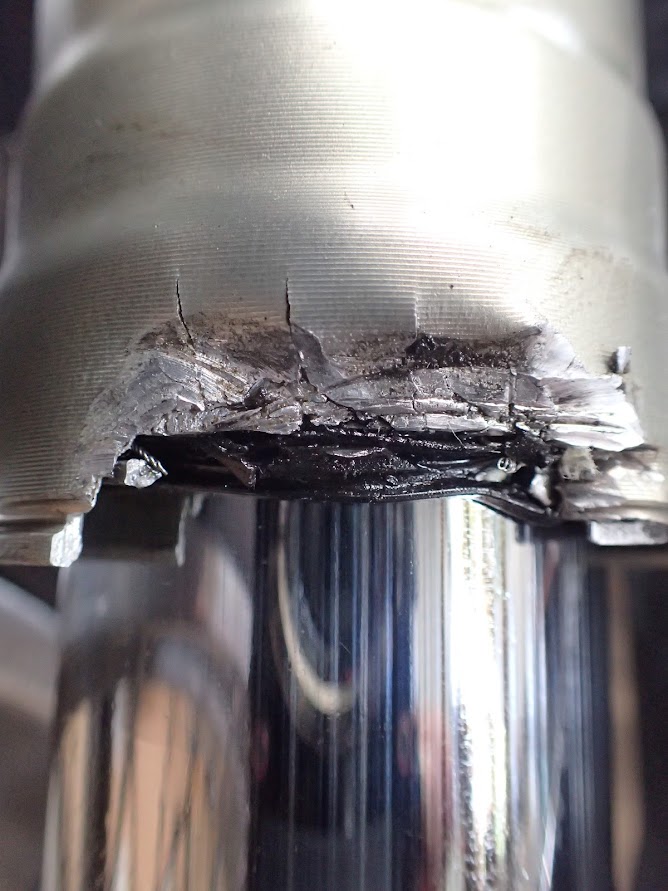 In the medium term the additional forks may allow me to set up second disc – but I would have the same issues as this one – the triples were set up for dirt bike hubs & not the wider road bike hubs, & so there is limited room to allow a dual disc set up.

Modifying the brake disc set up:

The R1200C stock brake disc is held by a combo of bobbin, bolt & wave washer. The disc is circa 5.00mm thick. The bobbins have circa 6.5mm area on which the disc can move. The disc ‘floats’ on the bobbins, with wave washers to suppress the disc rattle. The bobbins connect to the hub with button headed bolts, which sit proud from the disc circa 9.5mm.

To gain clearance, I initially tried switching from a button headed disc bolt to a counter sunk bolt. The Bobbin was counter sunk to match the bolt. However I didn’t get enough clearance with this set up. 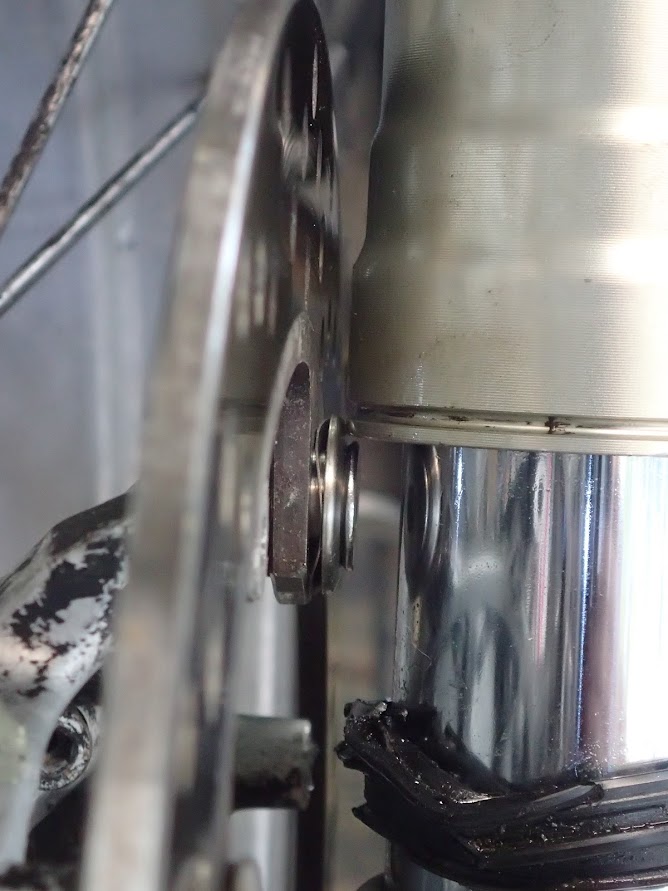 Subsequently I ground down the bobbins to 4.5mm, & dispensed with the wave washers. This means that the discs are now fixed rather than fully floating. I have also replaced the 8mm x 20mm button head bolts with 8 x 16mm counter sunk bolts, & also counter sunk the bobbins to accept these. This takes the area proud of the disc from 9.5mm to just above 3.00mm. 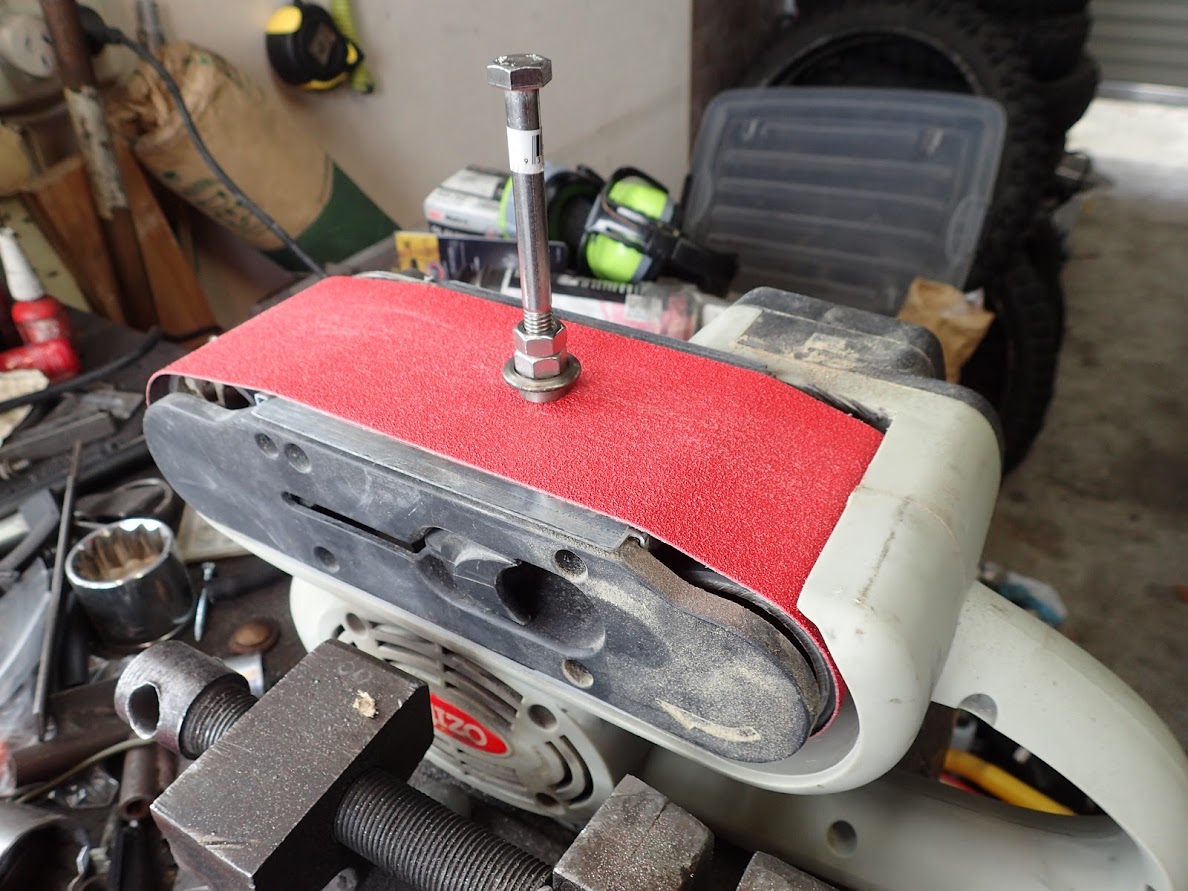 Once all of that was done, the disc bolts were a whisker away from the fork leg. However that didn’t provide for the snap ring that the fork guards ride on. So I have filed a small amount off the hub ‘arms’ that the disc bolts to. I’ve now achieved circa 1.5mm clearance, which should be okay. 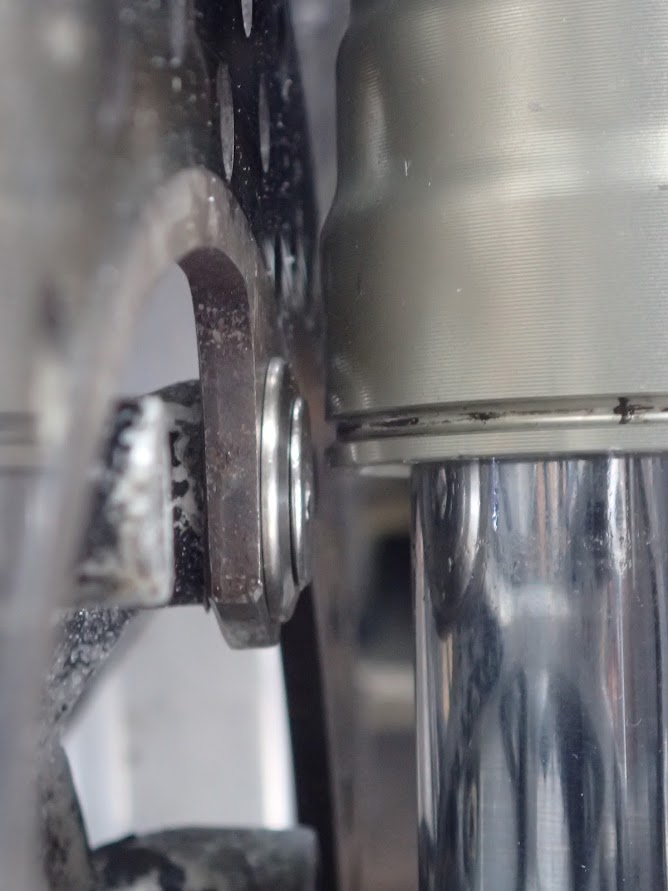 The speedo magnet was ripped out early in the South Island trip. That was bolting into a converted ABS ring mount. I have shortened that slightly, drilled the damaged portion out, & helicoiled it.

Built up a new LHS fork leg from the cartridge & lower stauntion of the original, and the fork top from the new forks. I did this because the replacement LHS fork lower had a nasty rust snarl right near the bottom compression.

This meant pulling both forks down to component parts. I needed to Dremel out the damage from the original fork top – otherwise it wouldn’t release the fork seal & bushes. Ironic.

I’ve found a ground down 19mm socket works well with a rattle gun to release the bottom compression adjuster nut.

I have rebuilt the leg using the best of the bushes from the two legs. Here is a few You Tube videos that were helpful with that. Note in the Rocky Mountain video where he talks about three bushes, two bushes of equal apparent size, but that the thicker of the two goes on the bottom.

Pulling down the forks

Once reassembled, I noticed that there wasn’t any/much rebound, & the adjuster wasn’t bottoming out. Got up to 50 clicks before I realised that maybe the adjuster wasn’t working. The video below helped resolve that issue. It was a combination of both issues raised in that video.

In addition to this, the clicker was missing the location prong on the base of the adjuster – the adjuster still worked, but this couldn’t positively locate. By gently prying up the adjustment knob, I was able to disassemble this, which then allowed me to swap the good parts from the replacement fork top into the older fork top (I wanted to retain a matched pair).

The clickers work with a small spring bored thru the clicker, with ball bearings in each detent. Watch out for those little buggers – I have a very clear area under my work bench now after they went missing multiple times (apparently I am a slow leaner). A bit of grease helps them not rocket off so much…

I still need to investigate stronger fork & rear shock springs. Things are too soft & I have too much sag.

Wayne’s starter died just as I was about to take Gus out for a 1st test ride. So I needed to rebuild a starter motor sooner than expected.

Pulled the EME starter down, cleaned it & then put a valeo nose casting on from the starter Gus previously ate at the Makairo Meander. Then buttoned everything back together. It was a very noisy starter – I’m guessing something bent when the casting broke. Shortly after that it refused to start again. Bugger…

So I have made a new starter out of the remains of Gus’s Makairo starter, & Wayne’s planetary gears & sprag clutch. So far so good.